Can Your Psp Do This?: Donkey Kong Hockey Game & Watch has Two-Player Action

The ancestor of portable gaming systems is Nintendo’s Game & Watch series. And if we’re going to believe its Wikipedia entry, the “spiritual” ancestor of Game & Watch games is an LCD calculator. Portable gaming sure has come a long way since the ancient 1980s, but there are some things from its past that have yet to make their way to the present. Take for example the Micro Vs. series of Game & Watch games. It’s a portable game that allows for 2-player head-to-head on the same system via two tiny controllers. Interested? Then checkout eBay seller chickeneater‘s Donkey Kong Hockey Micro Vs. Game & Watch. 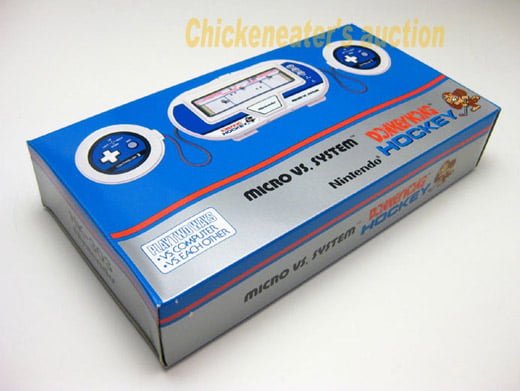 Look at that bizarre, two-tentacled electronic creature. What’s weirder is that chickeneater’s copy of the game is brand new, and has only been opened once to have its picture taken. Clearly, chickeneater’s house has a door to the 1980s, because if you check out his store you’ll find all sorts of relics and (non)living video game fossils from the 80s, all of them in mint condition. Wanna know something even weirder? As it turns out, you can play a hockey game using only one button! Screw you EA and your complex control mechanisms! 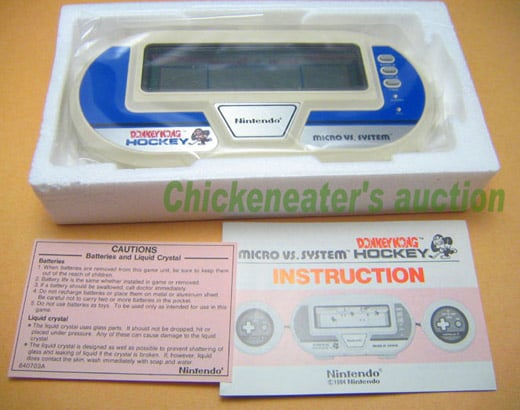 The Donkey Kong Hockey Micro Vs. Game & Watch sells for $85 USD (plus shipping) on eBay. It includes packing foam, original plastic bag, caution notice, instructional book and one of Robert Smith’s lipsticks. I was kidding with the last one. Robert Smith has used the same lipstick since 1975.