Everything but the Kitchen Sink: Xstreamhd to Beam 1080p Movies, Music, HDTV & Games via Satellite

I can imagine how a streaming service can send movies, HDTV, and high-quality music to homes, but games as well? Hmmm. That’s what XStreamHD claim they will provide, apparently via Care Bear satellite beams. 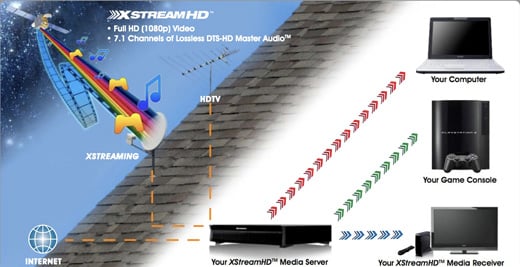 Seriously though, XStreamHD’s got a lot on their hands, and I’m not just talking about their patent-pending technologies. One, the company claims that they will be able to provide their customers with movies even before DVD-copies become available. (Sorta like torrenting, but in a legal & paid manner). Two, the service claims to work its HD magic by pre-fetching content at resolutions up to 1080p with DTS-HD 7.1 Master Audio tracks.

Three, XStreamHD claims that their software can “learn” user preferences so that it can predict and select future content for the user. Four- and this is where I need some enlightenment that XStream’s introductory video unfortunately did not provide – XStreamHD claims that they will stream games. What kind of games? Will these be tied to current consoles or *gasp* standalone games?

What we do know right now (pdf brochure) is that the basic XStreamHD set-up requires a satellite and server (up to 2 TB internal storage; expansion via eSATA available) for receiving and archiving the media that customers select and a media receiver connected to a TV to access the downloaded content. But if you own a DLNA-compatible device such as an HDTV, Blu-ray player, a PS3 or Xbox 360,  then those can be used in place of the Media Receiver to watch or listen to the downloaded stuff.

It’s still too early to tell if XStreamHD can pull this off or not, but I think we can all of this – hardware, software, & streaming service – to be anything but cheap. What do you guys think? Is it possible? Guess I’ll have to be content with my XtremelyPlainSD 21″ TV and its XtremelyAnalog Indoor Antenna for now.