I recently had the opportunity to get my hands on the brand new BENQ Joybee GP1 mini projector and put it through its paces. 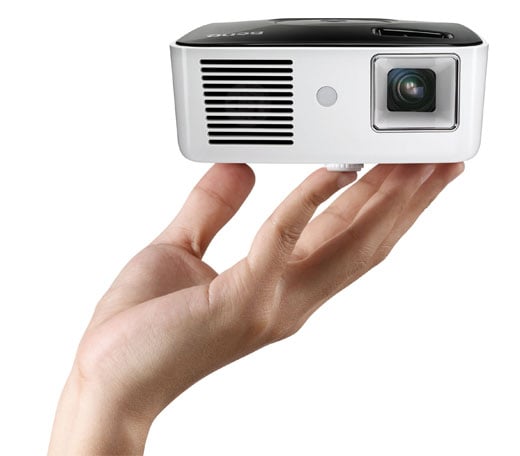 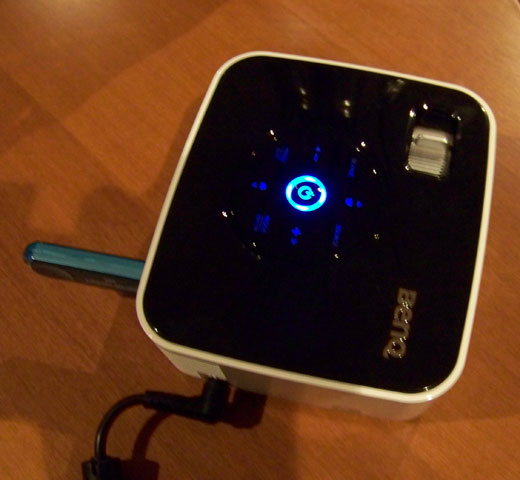 And this isn’t one of those silly pocket projectors that can barely muster an image in a darkened room. The GP1 is powered by three bright PhlatLight LEDs and a Texas Instruments DLP panel (you know, the kind with millions of tiny mirrors). Contrast ratio is rated at 2000 to 1, but I don’t have the equipment on hand to prove how accurate that is or not. Regardless, when I checked out some test content, it looked as good or better than the contrast on my backlit LCD television, but not quite as good as my pricey SXRD display. Brightness is quoted at just 100 ANSI lumens, which certainly won’t win any contests, but is more than sufficient if you’re in a light-controlled environment.

Keep in mind that the on-screen photos below don’t really show you how good the picture looks – there’s nothing like taking photos in a dark room with no tripod. 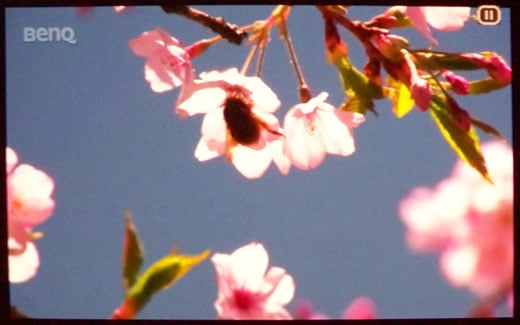 The diminutive projector manages to crank out images from 15″ to 80″ diagonal, and while it works best in a darkened room – it can reasonably handle large images in a room with some ambient light. Here’s a 50″ image with the lights off and then on. 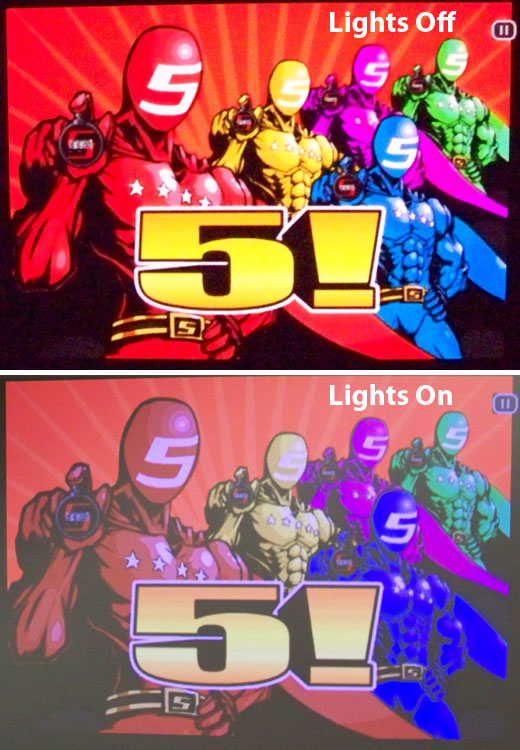 The Joybee’s native resolution is 858×600, which isn’t quite HD, but is plenty for playing video games, watching DVDs or doing business presentations. And speaking of video formats, the GP1 can handle most resolutions you can throw at it from 640×480 to 1280×1024 from your PC, and 480i/p, 576i/p, 720p and 1080i for other video sources. There’s a pretty good downscaling system for those higher resolutions, but you’ll always lose some information when you drop the resolution down lower than the source. At native resolution, the images are sharp as a tack. 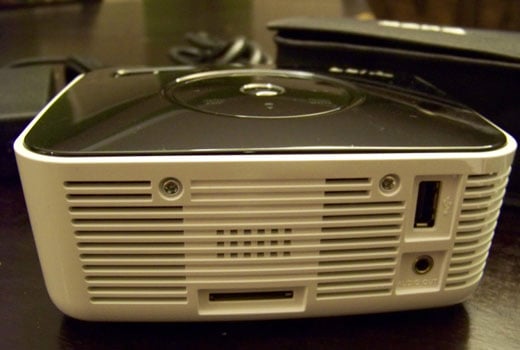 In addition to being small, the GP1 offers the ability to be operated without a PC or other video source attached. That’s because it has a built-in multimedia playback system that can handle images and video files in a variety of formats through its USB reader. Out of the box, it can support XviD, MPEG-4 and MJPEG formats, as well as images in JPG, GIF, BMP and TIFF. BENQ also will be bundling a copy of ArcSoft MediaConverter to take your files and transcode them to the formats required by the projector. Keep in mind that the max video playback resolution off the USB reader is 720×480 at 30fps, which is slightly lower rez thatn the projector’s native pixels. Of course, you could always just hook up your laptop and play a DVD to skip all that rigamarole. Or better yet, just dock your iPod or iPhone, with the optional dock. 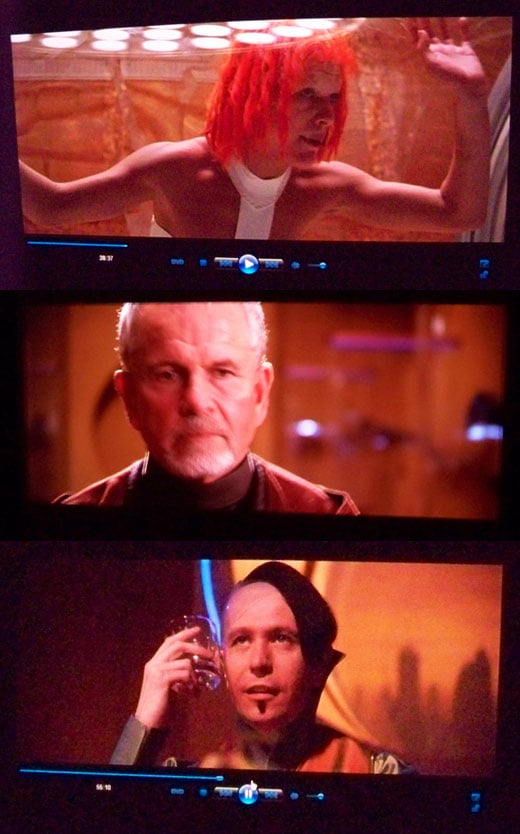 I did run into some decrease in brightness when playing content from the VGA port on my Dell laptop (images above), but given how bright the projector was with content on a USB flash drive, I think the issue was more likely something with the video output on my computer than the projector itself. That said, with VGA – YMMV. 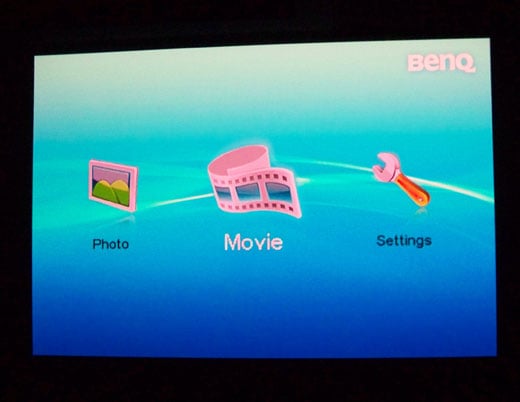 The pint-sized projector also has a nifty feature that color corrects images based on wall color. I live in a house filled with colorful walls, so I decided to put this feature to the test. There are presets for a variety of wall colors, including blackboards.

Here’s a shot taken on a medium green wall in my media room with the correction set to “light green” (the whites sure looks white to me): 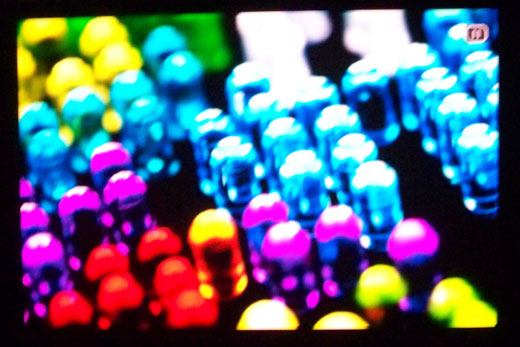 A few other niceties include auto keystone correction, a tripod socket for installing the projector when you don’t want to put it on a tabletop, and a built-in speaker (that won’t blow anyone’s eardrums). The projector also has advanced settings for flipping the image upside-down or backwards so you can ceiling mount or rear-project with it too.

But I think my favorite thing about the GP1 (besides its size, of course) is the fact that it starts up immediately with no wait time. Plus, the LED light source can run for 20,000 hours, which means you won’t ever be changing expensive light bulbs like you do with traditional projectors. It still generates a tiny bit of noise (28db) in order to keep those bright LEDs cool, but it’s way quieter than my Xbox 360 – or my PS3 for that matter. 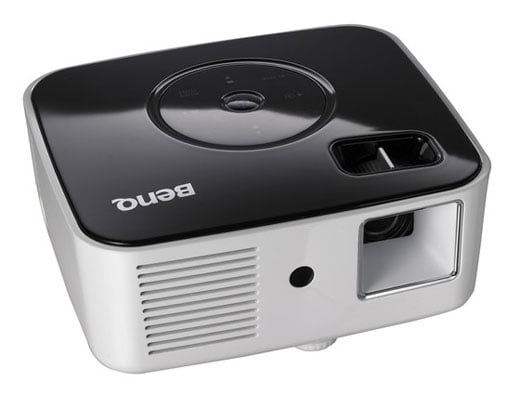 Included in the box is a power pack that’s about the size of your average laptop charger, a compact remote control, and special CEA 30-pin video cable for connecting to VGA or composite video sources and analog stereo audio. There’s also little nylon carrying case that fits only the projector, but none of the accessories. There’s no component video cable included, but you can always pull component signals through the VGA connector with the proper adapter. 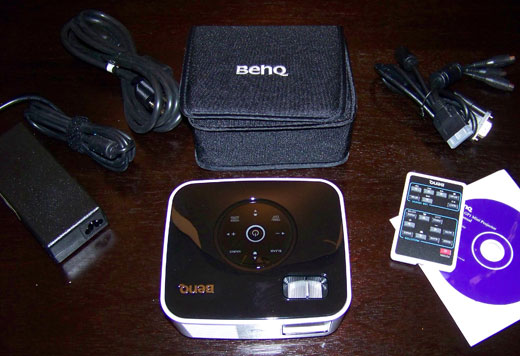 Unfortunately, there are no DVI or HDMI connectors. Hopefully BENQ will recognize this shortfall and come up with a 30-pin to HDMI cable in the future. I’m also not a big fan of the remote control – the keys aren’t in the most logical places, and I have a rule that any device that is operated with the lights off should have a backlit remote. On the plus side, it’s just an IR remote, so you can use any of the learning remotes out there if you’d prefer.

Overall, I’m impressed with this little projector. Subjectively speaking, Image quality is quite good for a device of its size, and I love the idea that you can use it without a PC if you want. Again, the biggest miss as far as I’m concerned is the lack of a digital input. HDMI is de riguer these days, and there’s no good excuse for not including an HDMI input on the GP1 – especially since it’s got built-in audio. Sure, the GP1 is never going to compete on brightness with larger units powered by traditional light sources, but for a impromptu gaming party or if you travel and do lots of business presentations, it’s great. I just love the idea that I can throw this little guy in my backpack, and set up a mini movie theater anywhere I go. It’s also a cool gadget for things like art video installations or in darkened environments like nightclubs, where you could load up a bunch of standalone units with video loaded onto a USB thumb drive and project some esoteric imagery.

The Joybee GP1 will be available from U.S. retailers (and direct from BENQ) on June 10, 2009, with an MSRP of $499 (USD). If you’re in the market for a compact projector, you’ll definitely want to check out the BENQ website for more details.