Wouldn’t it be neat to be able to have WiFi-like access to electricity? While wireless power is by no means a novel concept – Thomas Edison and Nikola Tesla already explored the possibility of wireless power –  US-based company WiTricity claim that they have one of the most feasible methods of making the world a lot more wireless. In fact, WiTricity chief executive Eric Giler said in an interview with BBC that their technology may even be in use as early as one or two years from now. Of course all of this is dependent on a lot of factors – the cooperation of electronics manufacturers for one – but it seems that Physics is on WiTricity’s side as well. 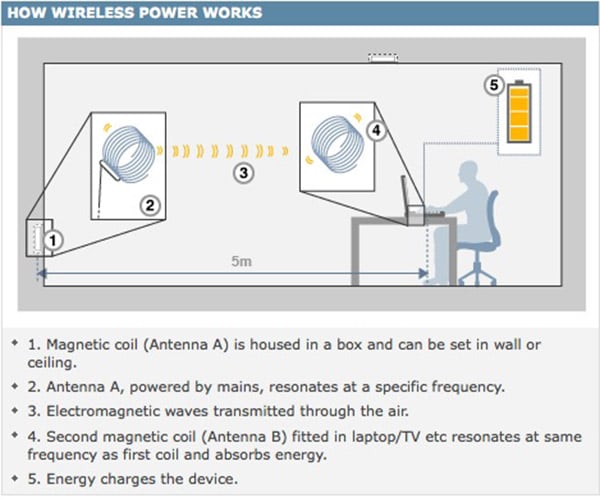 The image above shows how coils connected to a power source and to devices facilitate the transfer of electromagnetic waves that are then used to power the device. The technology is based on the work of MIT physicist Marin Soljacic, and other scientists are giving it a thumbs up, not just for its feasibility or efficiency, but for its safety. According to Professor Peter Main at the Institute of Physics in UK, electromagnetic waves are harmless as long as they’re transferred at the right frequency. Unless you’re Wolverine, in which case you’re screwed. Here’s a demo of WiTricity’s technology:

Man, I hope I don’t die before all of these awesome technologies go mainstream. Except for Raytheon and their ray gun. I hope that project fails.