Remember how in Wall-E how the humans got so lazy that they left everything in the hands of robots? Seems some people need to watch – or re-watch – that awesome movie, because it seems that we’re just looking for excuses to build a robot. Case in point: the Bloodbot, a horribly misnamed medical robot designed by researchers at the equally creepily named Imperial College London. The idea behind Bloodbot? Automate the process of taking blood samples, an activity that takes no longer than 30 seconds. Have nurses and doctors become terrible at doing this? I don’t think accuracy is the issue here. But I’m no visionary, so I’ll just accept the possibility that we’ll have large scale blood samplings in the future and so we’ll need a roomful of Bloodbots to do it. 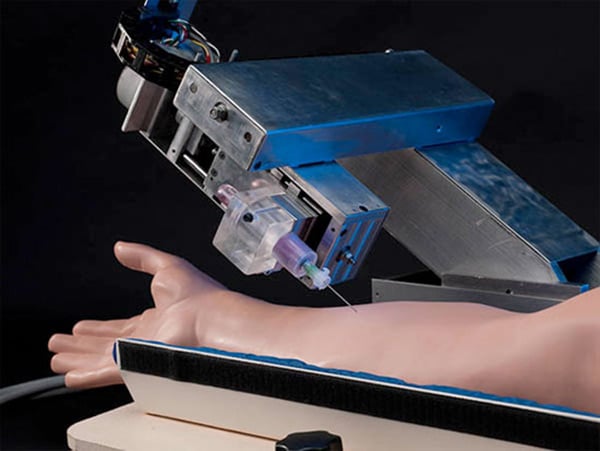 Some of you may not see anything wrong with the idea behind this automated stabber. Well then let’s look at how it works: the Bloodbot is able to select a suitable vein – one that is close to the surface of the skin – from which to draw blood from by pressing a probe onto a patient’s arm. Using mathemagics, the robot is able to detect the unlucky blood vessel and then inserts the needle under what the EMPIRE Imperial College London calls – I shit you not – “force control”. 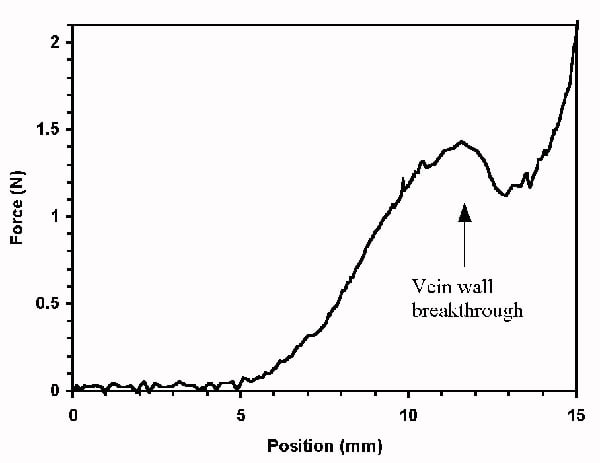 Really though it’s just a fancy way of saying that the Bloodbot can sense the force that a patient’s skin is exerting on the needle. As the graph above shows – and as common sense dictates – our skin resists the needle somewhat at first, but since the Bloodbot is hellbent on stabbing you it will keep on piercing the skin. As soon as the robot’s needle pierces our skin, the force that our relatively tough skin exerts on the needle is gone, replaced by the weaker force from our blood. The robot (hopefully) detects this drop in force and stops inserting the needle so as not to run you straight through. The temptation is still there though. Now consider this: at any given moment there are millions of people who are eating and/or drinking. That’s a massive enough scale right? Do you think we need Foodbots and Drinkbots? They’ll surely save us a lot of time and energy.