Another cool new technology just surfaced during CES week. Casio has just announced a new slimline projector that does away with those nasty mercury based light bulbs and replaces them with a combination of LED, laser and fluorescent illumination. 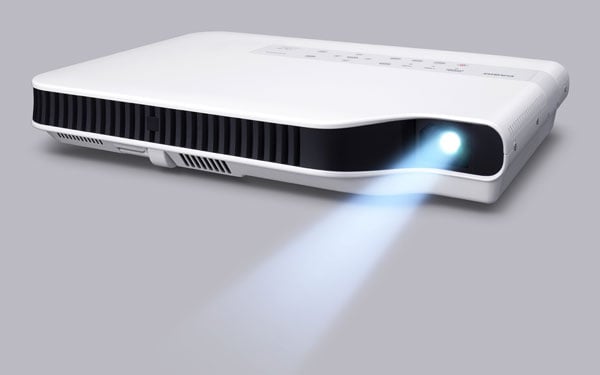 And unlike those LED mini projectors, this is a serious projector, pumping out a whopping peak brightness of 3000 lumens! The new hybrid light source manages to combine these multiple light sources to produce a super bright image. Blue lasers produces both blue and green colors, while the LED punches out red. All of these are combined and pushed through a TI DLP chip, at resolutions up to 1280 x 800.

The Green Slim projectors are about the size of a sheet of letter-size paper, stand about 1.7″ tall, and weight about 5 pounds. While that’s nowhere nearly as small as pico-projectors, there’s no comparison when it comes to brightness and resolution.

Casio plans on releasing several models of the projector, including 2000, 2500, and 3000 lumen variants, as well as lower resolution models which will assuredly be the least expensive. The top of the line models can also receive data wirelessly from up to 4 PCs.

The first of the Green Slim projectors is set to hit the streets in February or March, with prices ranging from $899 to $1299 (USD), so  if you’re in the market for a new data or gaming projector, you might want to wait to check these out when they’re released.