There are rocks blocking the way, reports Ars Technica’s Ben Kuchera from the beta testing battlefield of the highly anticipated RTS StarCraft 2. These destructible rocks have 2000 hit points and intentionally block chokepoints or base entrances in order to prevent, or at least discourage early game rushing, since small fry like zergling will have to chip away at the rocks for quite a while before they reach the enemy base. Bigger units will most likely trample them to dust though. 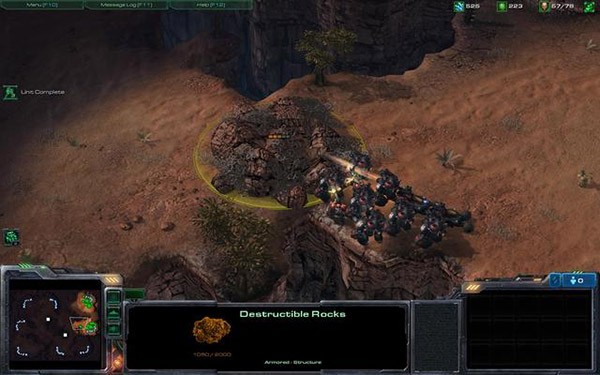 It’s important to note that the rocks are an optional feature in maps, theoretically to give newbies more time to explore and test the game, or perhaps as an added challenge for veterans. So keep your cool, hardcore Starcraft fan. The rocks are optional.

The reactions of Ars commenters to the new add-on are varied; one said that the rocks caused a lot of matches to devolve into air versus air battles. Others said that the feature isn’t new at all, citing some maps in StarCraft 1 that had minerals blocking the paths. Still others cited rival RTS Total Annihilation, which not only had destructible walls that served the same function but also gave players a “No Rush” option; i.e. units are confined to their spawn points for a limited amount of time right after the battle starts.

I don’t really like RTS games, so all I know is that if this makes it to the final version of the game, “destructible rock” will be the perfect nickname for players who suck, like me: we only last the first few minutes, and are nothing but cannon fodder.