I was at the LA Auto Show once for the press preview and spent many an hour walking around the show hall drooling over the cars on display. I spent lots of time at the Ferrari display because that is as close as I will get to owning one. I figured I didn’t have anything to lose, so I walked up to one of the hot booth babes and asked her to let me sit in one of the new $150,000 F430’s. Surprisingly she said yes, it was the highlight of any tradeshow for me. 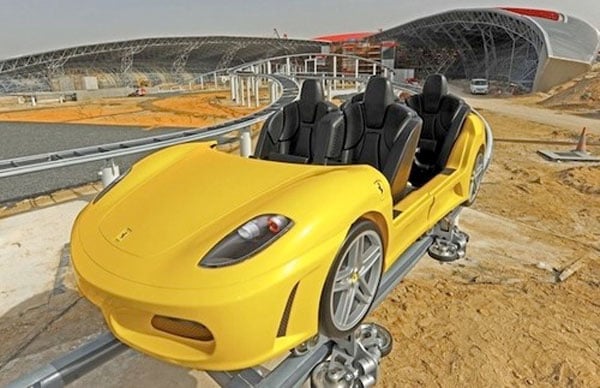 If you ever get to Abu Dhabi you won’t have to beg a booth babe to let you sit in a Ferrari if you head over to Ferrari World theme park. The park has the coolest roller coaster I have ever seen. The thing has coaster cars that are Ferrari F430’s.

The track looks sort of like a road and I can only imagine it would be a sweet ride. An even cooler coaster is rumored at the theme park though – based on F1 racing. The coaster is said to hit 149mph! That is insane for a coaster, most that I have seen only go about 40-60mph.