The city of Melbourne, Australia currently has two suns. There’s the normal one that it shares with the rest of the world and goes away during the night, and there’s the one in Melbourne’s Federation Square, rising at night, about 100 million times smaller than the real Sun.  This little one is called Solar Equation, and it’s the work of artist Rafael Lozano-Hemmer. It’s a tethered helium balloon with a diameter of 47 feet, and on it’s surface five HD projectors blast images of solar flares and other awesome stuff that happens on the surface of the Sun. 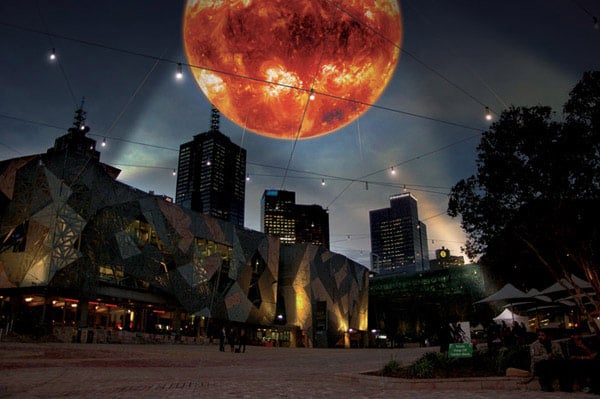 It looks awesome, but I was surprised at how complicated this high-tech art really is. Since Solar Equation is a balloon, it bobs and sways with the wind. Simply projecting images onto a fidgety surface would not be cool at all. So, according to Switched, “Lozano-Hemmer and his engineering team had to develop a 3-D tracking system to monitor the position of the balloon.” This system monitors the balloon’s position an amazing 30 times per second, and then coordinates with the servers to which the projectors are connected to, ensuring that the projected animation is always smooth. But that’s not all; this sun is interactive too! Want to mess with the animation of Solar Equation? There’s an app for that. Visitors can use their iPod Touch, iPhone or iPad to. change the animation in real-time.

So what’s the use of a second sun? Lozano-Hemmer says, “while pertinent environmental questions of global warming, drought, or UV radiation might arise from the contemplation of this piece, Solar Equation intends to likewise evoke romantic environments of ephemerality, mystery and paradox.” In other words, it can stand for whatever the hell you want it to, or you can just look at it and admire it’s sheer beauty. And then shake your head and say, what a huge waste of electricity. Solar Equation will be on Federation Square until July 4.