Here’s a sharp contrast to the Kinect demo I talked about yesterday. IGN’s Executive Editor Greg Miller got to try out the PlayStation Move. Unfortunately Miller only had a tech demo with him, unlike yesterday where we saw some wonderful graphics courtesy of Forza. But overall, I think this demo is more satisfying to watch than the Forza one. I’m just afraid that the games won’t utilize the Move in fun ways, opting instead for Wii-alikes and FPSes. 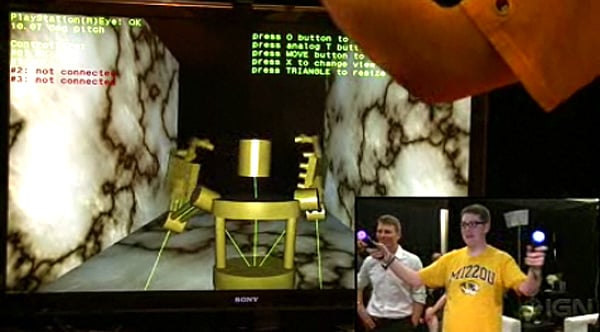 The demo not only shows how good the Move is at tracking the user, it also demonstrates my point from yesterday – it’s significantly easier to interact (with a flat image) using physical controllers, because you still have something tangible to work with, and the presence of buttons makes it easier to pull off a variety of moves, some of which can be complex or have no relation to motion at all.

Again, I’m not saying that Kinect will be a flop, I just think that it’s limited and simplistic compared to the Wii-mote and the Move. The rumor about the Kinect not being able to detect people who are sitting down is of great concern as well. But in the end, it’s the games that count. I hope both systems give us tons of awesome ways to enjoy motion controlled gaming.