Few things can rile up a crowd more than watching a heads-up competition, as in boxing, fencing, chess. Well, maybe not chess but you get the point. Inspired by the spirit of such spectacles, David Hindman of New York University wrote a thesis about controlling Mortal Kombat using real guitars. It sounds absurd because it is absurd, but it’s a funny and interesting concept nonetheless. 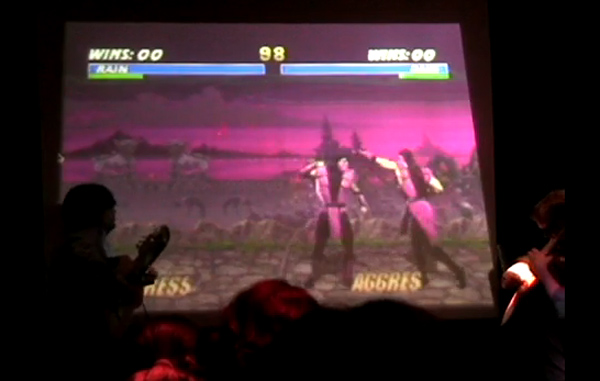 In an interview with Siliconera, Hindman explains, “I hacked into old-school video game consoles and re-configured their commands to respond to MIDI and/or Audio (the information from our guitars)”. Then he and his friends experimented with all kinds of control mappings in different fighting games. They mapped strings, chords and even scales to commands. Here’s Modal Kombat in action:

Obviously the video was made as a proof-of-concept. I’d like to see a good-looking and good-sounding match, like Crossroads meets EVO. Better yet, Hindman should come up with something like The Legend of Black Heaven. Now that would be awesome.

[via Siliconera via GoNintendo]