The Digg Revolt: Users Want Reddit to Take Over?

Last week, the popular social news site Digg overhauled its website, turning it into a hybrid social bookmarking/social networking site. It hasn’t been an easy transition. Many users despise the new look and have taken it to new lengths to protest. And it’s not just about the looks. It’s a true Digg Revolt! Check out this great timeline. 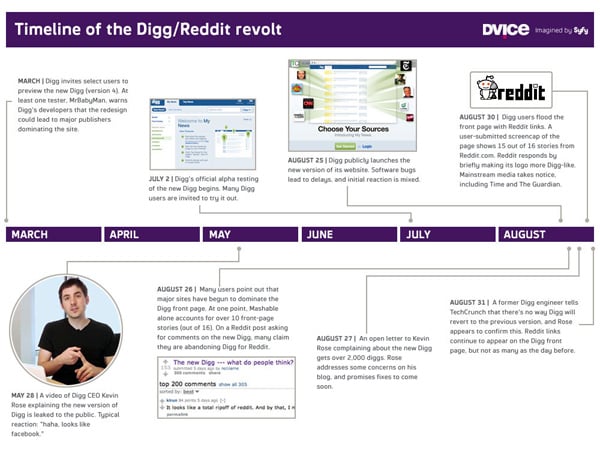 The revolters have even go so far as flooding Digg with Reddit links to drive traffic away from Digg. Why? Apparently, the way that the new Digg works allows major news sites and publishers to dominate the front page. Now that the power has shifted away from a small group of powerful contributors, many diehard users have started to abandon Digg for Reddit.

The Reddit/Digg spam links were in full force on Monday, but have quieted down since then. From what Digg says, it’s impossible for them to revert to a previous version, so I think we’ll be stuck with the new Digg for a while. To be honest, I’ve always like Reddit more than Digg anyhow. What do you guys think of the new Digg?