Hive Dock for iPhone 4 Boosts Both Audio and Video

We’ve featured many speaker docks for the iPhone and iPod Touch, including ones that don’t need electricity to amplify sound. But this is the first time I’ve come across a dock that also doubles the display size. It’s called the Hive dock, and its inventors swear by its usefulness. Unfortunately, they have the same marketing challenge that Nintendo has with the 3DS. 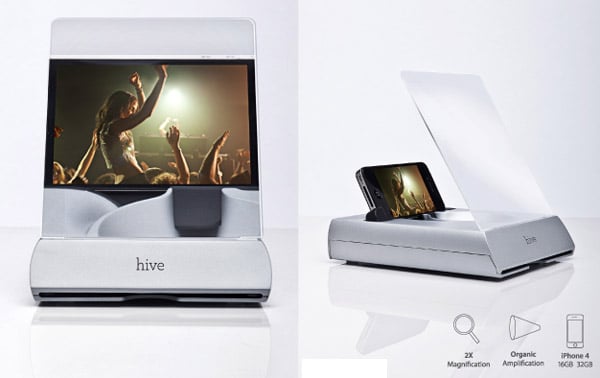 You see, just like the 3D effect in Nintendo’s latest handheld, it’s hard to appreciate the magnification that the Hive dock’s Fresnel lens provides in pictures or videos. In fact the effect is just the opposite – the magnified display looks distorted on video:

I have to admit, it is pretty hard to see the “improvement” with the display. To a certain extent this also applies to the amplification of the audio – but I guess we could say the same of other docks and audio equipment for that matter. Despite the criticisms and challenges, Jack Waitzman and his co-inventors Dorsey Cox and Zach Griggs are confident that they will be able to launch and sell the Hive dock. In defense of the video distortion in the clip, they state “A word about the videos… the magnification lens flare/glare/blur does not represent what is actually experienced in person. Hive’s A/V enhancement is obviously best when experienced through human eyes and ears. “

If you believe in the potential of the product, you can help Waitzman and company by backing the project on Kickstarter. A $45 pledge or above will get you one of the first Hive docks (at a discount from its $60 retail price).