I think that any 8-year-old knows that if they want to get onto the site for an “M” rated video game all they need to do is pick a random birthday that would make the fictitious owner 18 or older. Apparently, Crytek knows that your typical age verification test is easily foiled as well. 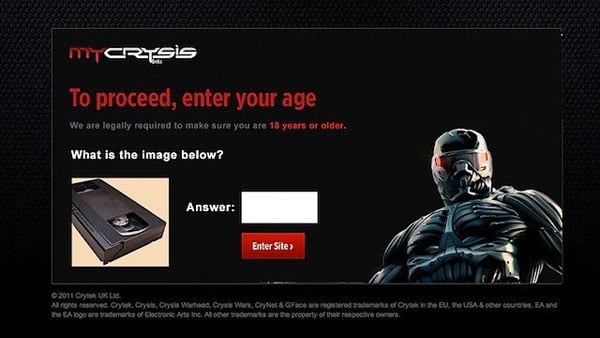 A screen shot turned up of an age verification test of a different sort. The test tells the user “To proceed, enter your age.” It then has a small image of a VHS tape and asks, “What is the image below.” A spot for the answer next to it. I’m not convinced this isn’t a Photoshop image at this point, but this is how age verification tests should be.

My son or daughter wouldn’t know what that tape is. Then again, I know some people that still rock the VCR and some video tapes for kid movies and those kids know what the tape is for sure. One thing that makes me think this might be a fake, or a trick question is that they say they legally need to confirm that you are 18 years or older.

[via FunnyJunk via Gizmodo]

The History of Pad Thai

How Rubber Balls Are Made