Back in my day, you were either Atari or Intellivision. The lines were clearly drawn. You chose your allegiance and you were loyal to that brand. Then at some point it was Nintendo versus Sega and so on. Nowadays, there’s no loyalty. We just love to play. 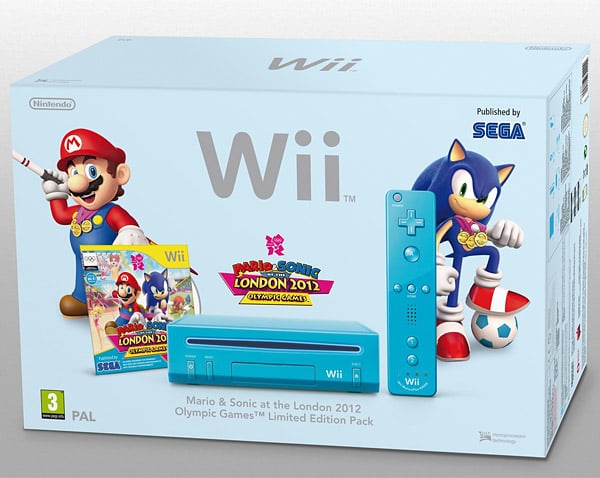 You have Sega games on Nintendo consoles, you can even play old Atari games on any console. Many of us have  both a PS3 and an XBox 360. There’s no brand loyalty, just the love of games. However you can’t help thinking back to those days when something like this shows up. A Sega themed Wii? If you would have told me back then that this could happen, I would have laughed. But here we are.

This Mario & Sonic at the London 2012 Olympic Games bundle had to happen eventually. In case you’re wondering, this is the new version of the Wii. The Wii-Lite. (There’s no wi-fi and you can’t play Gamecube games).

They even make you do all of the work, providing a sticker sheet so that you can create your Sega themed Wii. Thanks Nintendo. I can already put stickers on things.

You get a blue Wii, a blue Wii Remote Plus, a blue Nunchuk, the game, and a sticker sheet. If you’re interested in this oddity, you can get it in Europe on November 18th for an unknown price.

[via Siliconera via Techcrunch]