For those of us who purchased TVs without 3D capabilities, there’s pretty much not been a way to watch 3D content on these sets without buying a whole new set. This $60 gadget aims to change that, if not is a somewhat unusual way. 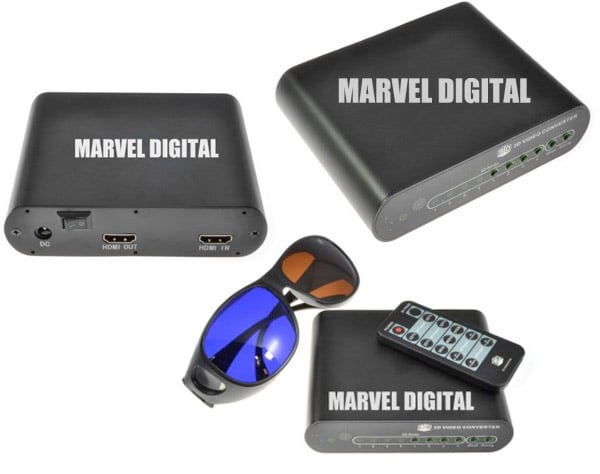 Now before you get all excited about watching that Avatar 3D Blu-ray disc on your older TV, it looks like this box can either produce simulated 3D visuals – from 2D sources, as well as display any content that’s in 3D “side-by-side” format. I’m pretty sure Blu-ray discs are encoded in sequential format, so those probably won’t work, but I suppose you could give it a whirl if your disc player supports 3D. On the plus side, DirecTV and XBox 360’s standard 3D format is “side-by-side,” so you should be able to watch this content in 3D.

In addition to supporting analglyphic 3D, the box will also work with proper 3D TVs (and passive or active shutter lenses) to simulate 3D from 2D content, but many sets already offer this capability. To use the 3D converter box, simply place it inline with your HDMI connected device, and it should take care of the rest for you. It offers full support for HDMI 1.1 through 1.4 specs, and can pass-through 1080p HD video. Keep in mind that “side-by-side” 3D cuts resolution in half, though.

I’m tempted to order one of these just to see how well it works, since my TV doesn’t support 3D. Priced at just 60 bucks, it’s not much of a risk. If you’re interested in giving it a whirl for yourself, you can order the 3D converter box from Marvel Digital.