Netflix for Xbox 360 Gets Updated

[UPDATE 12/16/11: Given our original positive spin on this update, we thought it appropriate to mention that there’s a ton of dissatisfied users speaking out about missing features, playback issues and a confusing new interface. Scroll down to the comments to join in the discussion.]

Good news for those of you who use your Xbox to watch Netflix. The latest version of Netflix is tucked away in the latest Xbox 360 dashboard update and it has some cool new features. 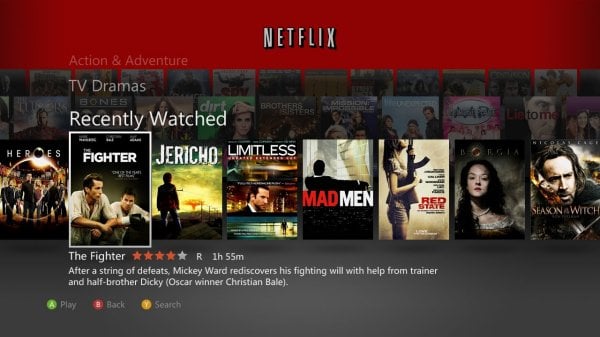 You’ll find a new user interface that allows for a more streamlined browsing experience and there are up to 3 times as many titles available on screen at once. Users also have access to audio and subtitle settings, ratings, episode selection, and related title suggestions.

There’s also support for voice and gesture control when using Xbox Kinect for browsing and playing, 720p HD and Dolby Digital 5.1 surround sound. The Netflix app will be automatically installed when you do the latest Xbox 360 Dashboard update. Netflix on Xbox 360 is now available in Brazil, Mexico, Chile, and Colombia. Of course, you need both an Xbox Live Gold and Netflix streaming account to take advantage of the updated app.