How Much is That Android in the Window?

If you find yourself at the Takashimaya department store in Shinjuku, Tokyo, you will have a special treat this Valentines Day. There, you will find the Geminoid-F android just chilling out in the store window, seemingly waiting for a friend. 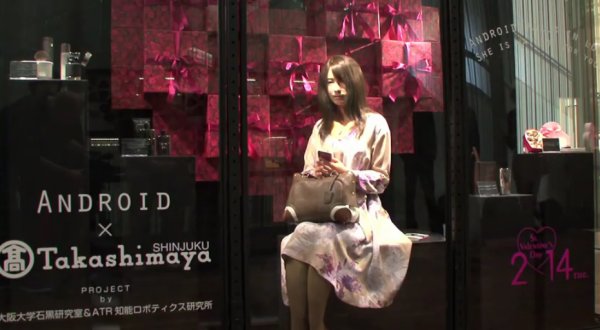 The idea is to use her as a next gen mannequin. Geminoid-F is capable of basic emotions and behaviors that it uses to create expressions and actions based on it’s environment. You can expect her to smile, nod and move about a bit in her chair, probably fooling some passers-by into thinking she’s a real woman.

She might even yawn as you pass by. One thing she won’t do (or so I hope) is break the glass with her fist and pick you up by the neck, while signaling other android mannequins that it is time for the invasion. That would be bad.