Zen Table: Etch A Sketch for the Rich

If you’d like to have your own zen garden but don’t have the real estate or the skills to maintain one, Simon Hallam’s invention may be a good alternative. Hallam’s Zen Table has a glass-covered surface filled with silicone beads. A sculpting head creates shapes, patterns or images using the beads based on templates or instructions in real-time. 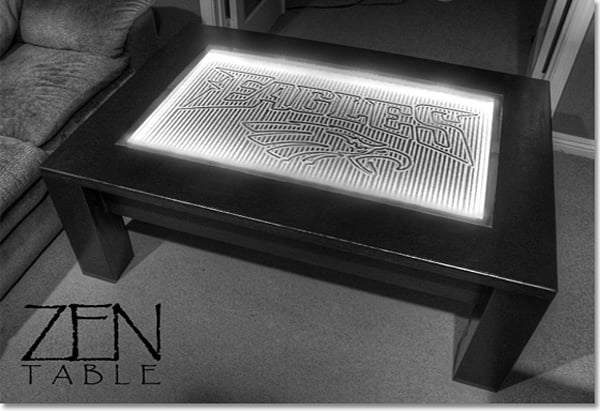 The Zen Table has two sizes – a coffee table measuring 56″ x 39″ x 19.5″ and a smaller desktop version measuring 13″ x 9.5″ x 2 1/2″. Both are made of bamboo and equipped with an SD card slot and a USB cable. The SD card slot is for the bundled SD card which will have several programs that instruct the table’s electronics to create patterns, but you can also send commands from a computer to the table via USB. 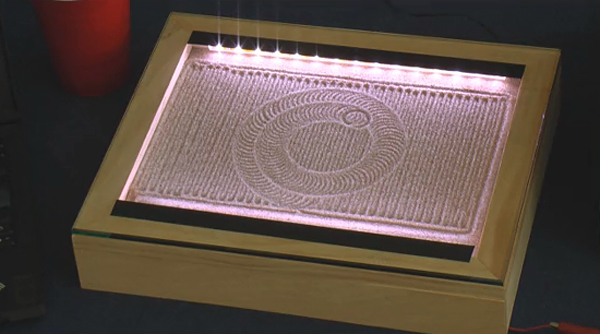 In addition, the coffee table version can also be equipped with a 3G modem that will allow it to receive new designs, as well as allow the user to control the table from an Android or iOS app that Hallam is currently developing. That means you can have the Zen Table write messages to people at the table or have it draw naughty images when your parents have a visitor. The possibilities are frightening. Here’s a demo of the Zen Table in contemplative action:

Here it creates something more modern:

Fancy eh? Kickstarter supporters thought so as well. Hallam put up a fundraiser on the crowdfunding website and was able to exceed his original target. I’m not sure when and for how much the final products will be sold, but the people who pledged at least $499 (USD) on the project are eligible for a kit containing the parts for the desktop version of the Zen Table, while $749 got them the same model but fully assembled. Two people pledged at least $4,999 to get their own coffee table Zen Table and one rich and lucky person shelled out at least $7,499 to get the 3G version of the coffee table. Meanwhile I’m still waiting for the iZen Garden app to go on sale for less than $5.99.

Head to Hallam’s YouTube channel to check out more videos of the Zen Table in action.

[Kickstarter via The Awesomer]