My sister is due in a couple of months, and the whole family is excited. She’s going to have a baby girl, and my parents are probably the most giddy set of soon-to-be-grandparents ever.

She got a 4D ultrasound done just last week, so we all got a good look at her baby. But before the 4D one was a sonogram that I did a bad job of interpreting. Where the baby’s head was, I saw a butt. Where her hand was, I saw a foot. Eventually my sister pointed out which was which and what part was where, so that settled that. 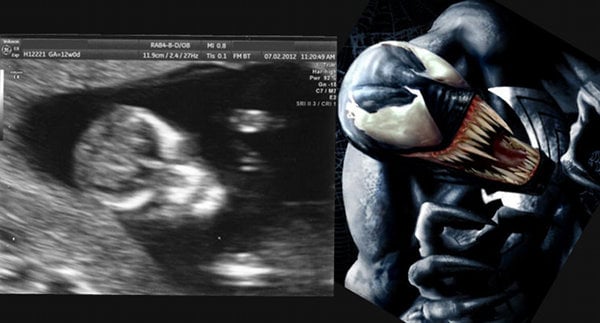 But if her sonogram looked anything like the one shown above, then I’d probably be more than alarmed – although I’d be able to recognize who (or what) she’s carrying insider her belly: Venom!

The sonogram was posted on Reddit by Venom’s proud father-to-be. Scary, huh?