If you liked shows like Mr. Wizard as a kid, you’ll want to check out this neat video, which shows students from the University of Pennsylvania separating two colored fluids that have been mixed together and suspended in a highly viscous liquid. Basically, they just “rewind” the fluid. 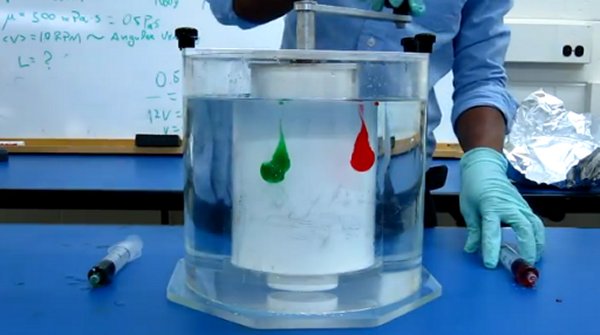 It really is that simple. I thought it was a hoax the first time I watched it, but it turns out that both the experiment and the science behind it are very real. It is as amazing as it is simple. First they turn the crank and mix it up, then they simply reverse and both colors separate once again.

They accomplished this with a cylindrical container with a second smaller cylinder inside that is attached to a hand crank. The “Stokes Flow” is what makes this feat possible, named after George Gabriel Stokes. It’s a type of liquid flow that is defined by the battle between inertial forces and the viscosity of the fluids in question. In layman’s terms, the liquid used here is so thick that it halts the scatter that would normally happen if the dyes were placed in a thinner substance like plain water. So the dyes get mixed by momentum diffusion, instead of molecular diffusion, which makes the process reversible.

Pretty cool, no? Too bad we can’t rewind plain old water and get rid of pollution.