As expected, Apple today revealed the iPhone 5. The new iPhone 5 is the first significant update to the iPhone line in 2 years, after last year’s incremental iPhone 4S release, and just in time for iPhone 4 users’ contracts to expire. Perfect timing again, Apple. 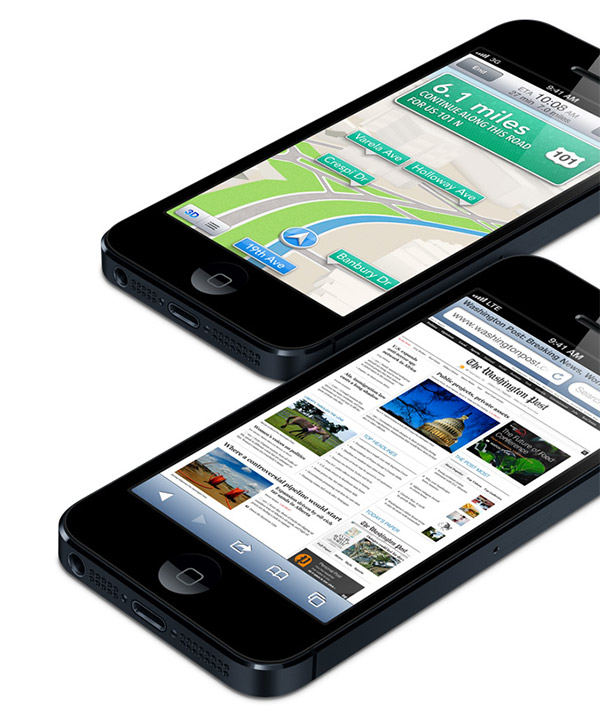 Starting off with the hardware changes, the new iPhone has a 1136 x 640 (326 ppi) resolution, 4″ multitouch display – for the first time offering a true 16×9 display ratio – ideal for viewing HD video content. This bigger screen also buys you one extra row of apps on the home screen. While Apple has already upgraded its bundled apps for the taller screen, existing apps will be centered on the screen with tiny black bars above and below. The new display is also much thinner, and touts 44% more color saturation than the previous model. 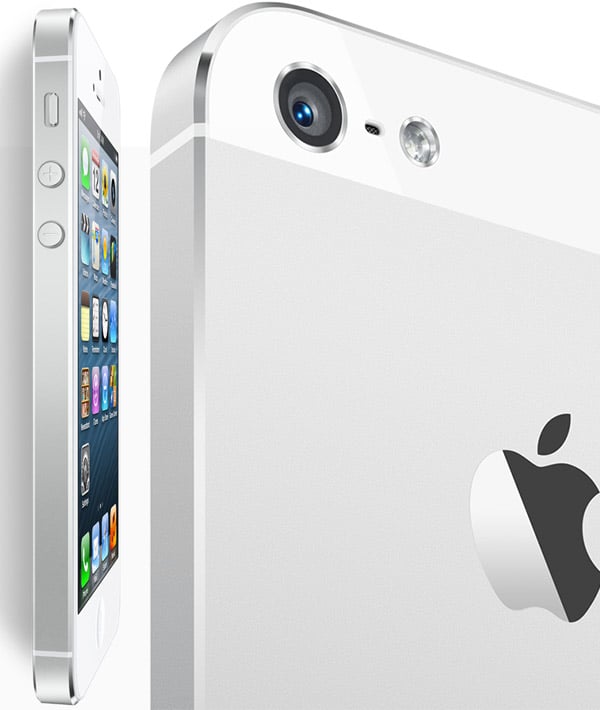 From the front, the iPhone 5 doesn’t look dramatically different – though the camera has been centered above the speaker at the top of the phone, and it looks a little stretched out thanks to the larger screen. On the backside of the unibody aluminum case, you can see a two-toned matte finish which looks nice and is should be way less susceptible to breakage than the all-glass back of the last generation. The iPhone is 7.6mm thick and it weighs 112 grams, making it the thinnest and lightest iPhone yet – 18% thinner and 20% lighter than the 4S as a matter of fact. 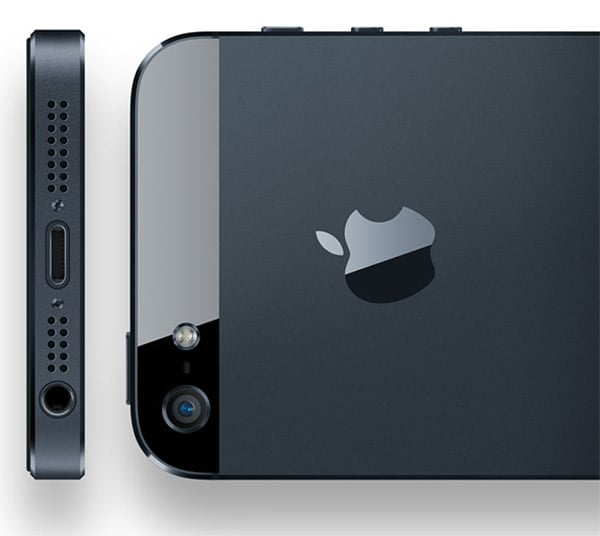 Under the hood, the iPhone 5 has an upgraded processor, the A6, which Apple says is twice as fast as its predecessor in both the CPU and graphics departments. And thank goodness, Apple has finally jumped on the 4G bandwagon, offering 4G LTE high-speed connectivity. Assuming you live in a 4G coverage area, this is reason alone to upgrade. The phone also supports HSPA+ and DC-HSDPA wireless technologies. Wi-Fi has also gotten a boost, with 802.11a/b/g/n and dual channel 2.4/5GHz support. 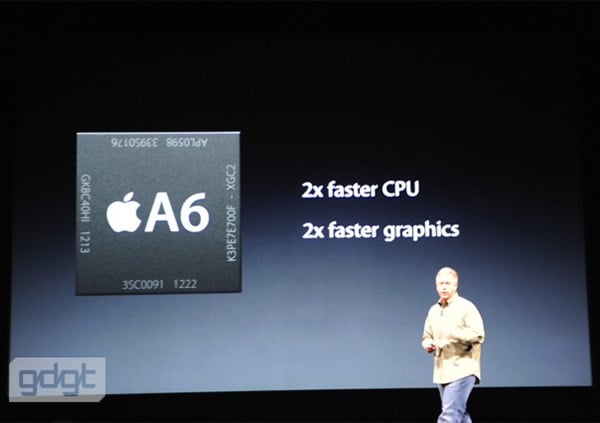 Despite the upgrades to CPU and wireless, Battery life is rated at 8 hours on an LTE connection, and 10 hours on Wi-Fi, which I assume they achieved thanks to the new low-power display. Word is that the battery is only a 1440 mAh model – in comparison, the Droid RAZR MAXX has a 3300 mAh battery – but it also has a much larger screen and older display tech. 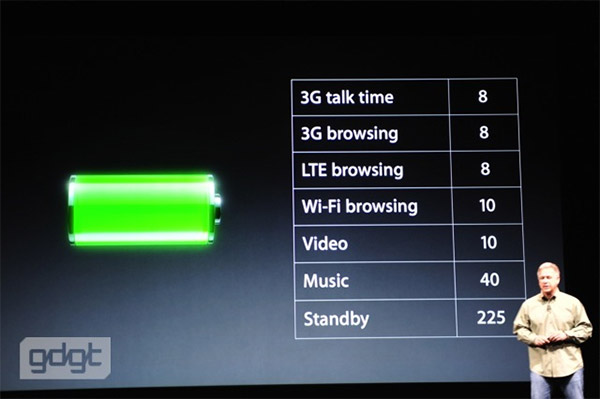 The iPhone 5’s camera sounds like no slouch, and it has to live up to the stellar camera in the iPhone 4S. It’s got an 8 megapixel sensor with backside illumination, a hybrid IR filter, five-element lens and an f/2.4 aperture. A new dynamic low-light mode provides 2 extra f-stops of performance compared to the 4S too. The new camera also is faster by up to 40%, and offers a spacial noise reduction algorithm in its new image processing chip. The camera also supports a panorama mode similar to the one found on Sony cameras, shooting massive 28 megapixel widescreen images. 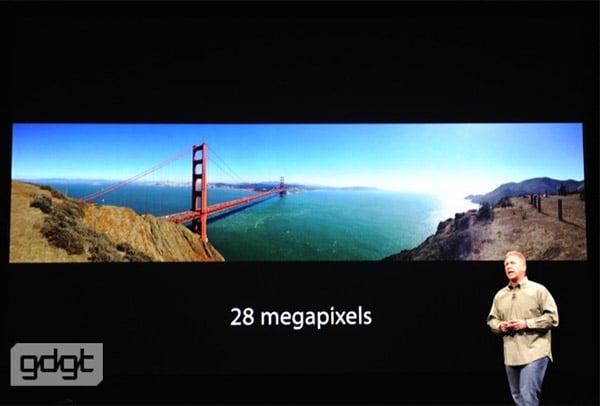 Video mode offers 1080p HD capture with improvements to image stabilization, as well as face detection, and the ability to snap stills while shooting. The front-facing FaceTime HD camera offers 720p resolution, with backside illumination, face detection. You’ll also be able to use FaceTime on cellular networks now. Also upgraded is the audio system, with three microphones (front, back and bottom), as well as improved speakers. In addition, you’ll note that the headphone jack has been moved to the bottom of the phone. 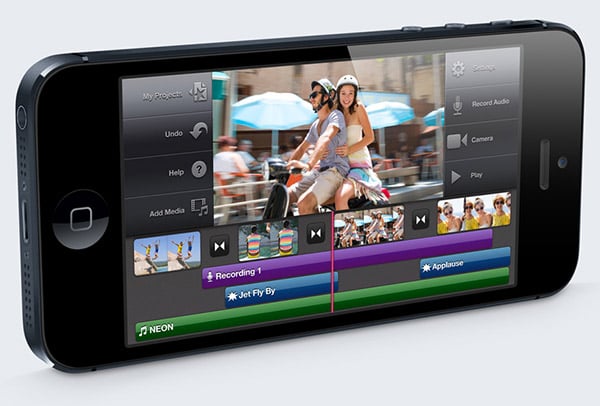 One major change is the switch from the long-standing 30-pin dock connector to a new all-digital, 8-pin connector, dubbed “Lightning.” While the new connector is more durable and 80% smaller to allow for smaller and thinner devices, it does mean you’ll need to start buying new accessories unless you’rewilling to deal with the use of an adapter. 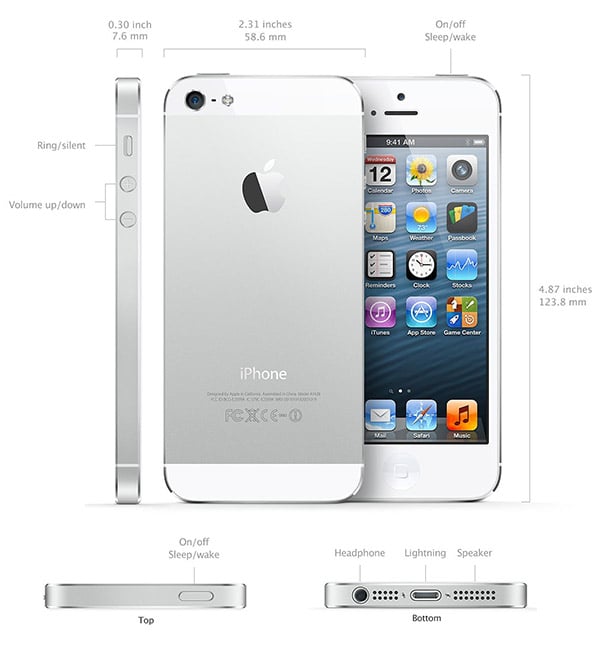 Of course, Apple will gladly sell you some ugly, but necessary 30-pin-to-Lightning connector adapters for $29 a piece. One can only guess that Apple will make tens of millions of dollars selling these over the next few months. 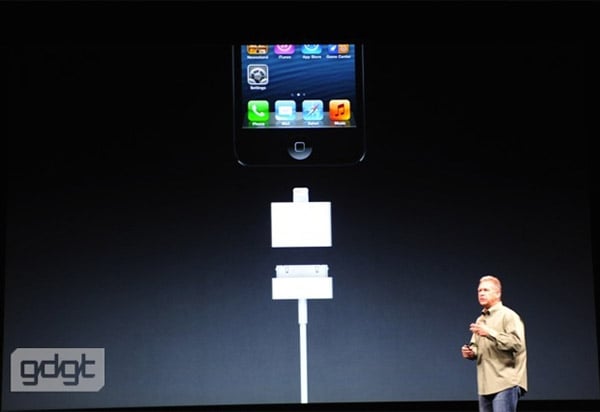 As anticipated, the iPhone 5 will ship with iOS 6, which is loaded with lots of goodies, including improved phone call handling (such as sending a text or SMS when you can’t accept a call,) Facebook integration, upgrades to Safari, Mail, Facetime and Siri. Shared Photo Stream lets you share images with family and friends, and allows comments and likes as well.

The new Passbook app will let you organize tickets, coupons and gift cards in one neat digital wallet. However, it looks like Apple chose to forgo NFC (Near-field communication) technology for now, which certainly doesn’t help the fortunes of that budding technology. 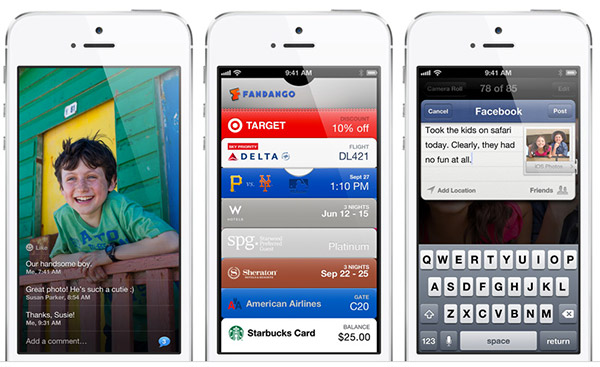 iOS 6 also is the first release to do away with Google’s apps – so both the Maps and YouTube apps you know will be gone. Instead, you’ll get Apple’s new maps app, which features sharp, vector-based images, turn-by-turn navigation, traffic information, Siri and Yelp integration. The only real concern here is how accurate and up-to-date Apple’s mapping data will be in comparison to the years of information Google has collected. As for YouTube, just grab Google’s own new YouTube app now. It’s much better anyhow. 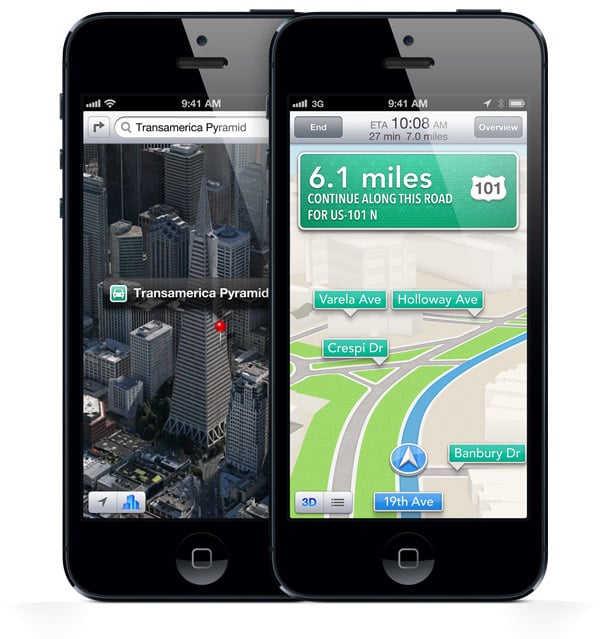 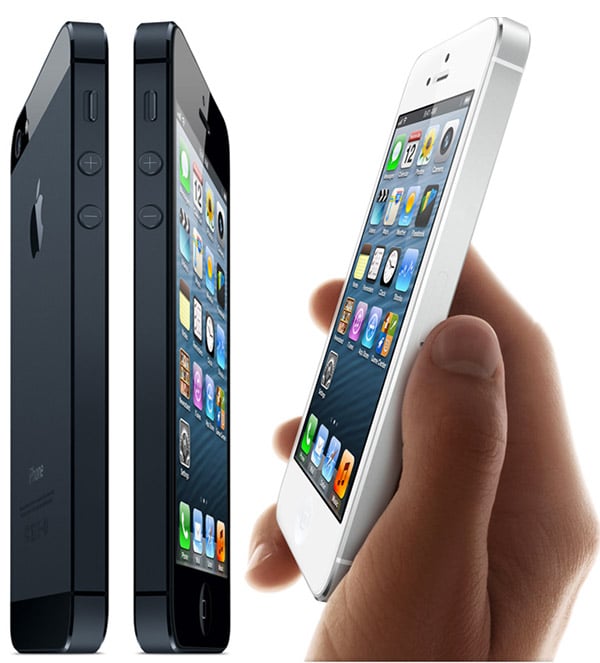 The iPhone 5 will be available for pre-order starting this Friday, September 14th, 2012, and will land in stores and homes in North America, Canada, UK, Germany, France, Australia, Japan, Hong Kong and Singapore on September 21st. 20 more countries will get the phone next month. Keep an eye out on the Apple website for pre-order details and more specs.

With all the leaks from parts makers over the last few months, there were no real surprises in today’s announcement, but the iPhone 5 still looks like the most impressive phone Apple has made to date. Assuming battery life is as good as they say, and the 4G networks aren’t brought to their knees when it launches, I can’t see many reasons not to upgrade if you’ve got an iPhone 4 or earlier model.