Amusement Park Riders Get Stuck 300 Feet in the Air

I go to amusement parks, but if I’m being honest, I’m not a big fan of heights. I don’t tell people I’m afraid of heights because I don’t want to be a puss. So I do the next best thing, I walk really slowly and scream at anyone who touches me even slightly because I’m convinced I’ll suddenly fly off those high platforms. It woudn’t have been a good day for me to be at Knott’s Berry Farm in California when 20 riders were stuck for four hours, 300 feet in the air. 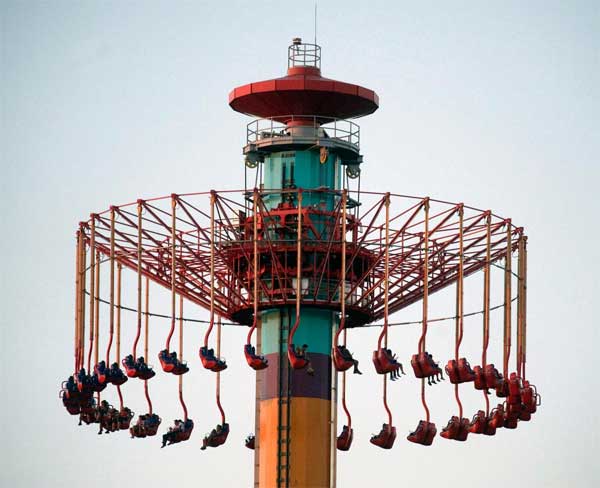 The 20 people were riding the Windseeker ride, which takes the people over 30 stories into the sky, with their legs hanging in the wind, and spins them around. One woman says her husband kept her from having what I’ll call a “bat sh*t crazy” moment because she’s afraid of heights. She says he kept her calm, but the first half-hour was difficult.

Eventually maintenance workers were able to get all of the riders to the ground between 7:30 and 8:00 p.m., which was long after the park closed. This is the second time this month riders of this particular ride were left stuck in the air. Knott’s Berry Farm says the ride will remain closed until they can find the cause of the issue.