Couple Gets Married in Klingon Wedding Ceremony, Everyone Lives

Nerds will do some pretty strange things for their love of Star Trek. Nerds like newlyweds Jossie Sockertopp and Sonnie Gustavsson. They have the honor of being Britain’s first known couple to get married in a Klingon wedding and were married at a Star Trek convention over the weekend. 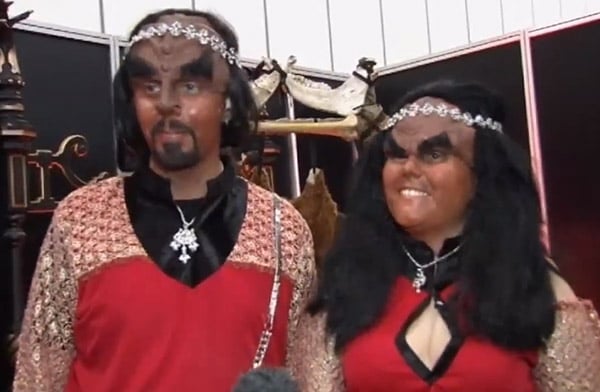 Despite the Klingon tradition of violence and bloodshed, no one was killed during the ceremony  – though we’re not sure about the reception. They met four years ago at the retirement home where they both work, and after watching the episode of Star Trek: Deep Space Nine where Worf marries Jadzia Dax in a traditional Klingon ceremony, they decided to do the same.

I hope they will be happy for many years, because the Klingon divorce ceremony far less pleasant.