As much as I hate typing on the touch screen of my iPad, I’ve resisted buying an external keyboard for my tablet as I didn’t want to add to the bulk of my svelte Apple gadget. But when I was given the opportunity to test out the ZAGG ProFolio+ keyboard case, I was intrigued – since it’s not only compact, but it offers full wrap-around protection for my iPad. 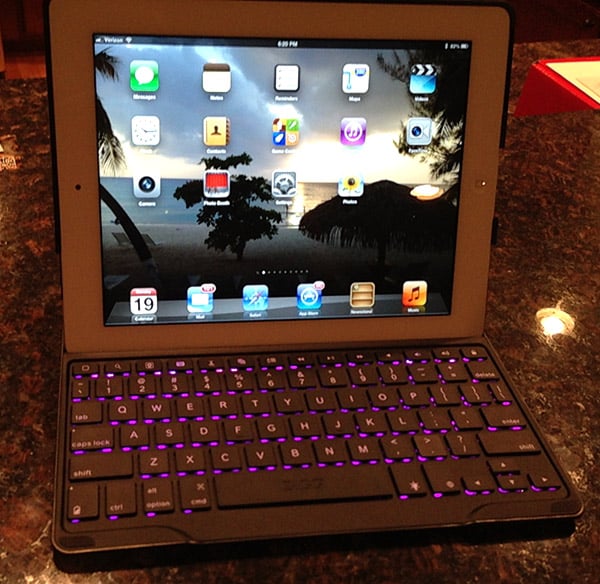 To help put it to the test, I’m writing this entire review using the ProFolio+ keyboard and my iPad. At its core, the QWERTY keyboard solves the very problem it sets out to. I went from a paltry 34 WPM typing with the on-screen keyboard, to a solid 68 WPM on the ProFolio+ – on the first try – literally doubling my typing productivity. Yes, the keys are little smaller and more crowded than the ones on my desktop computer, but they’re still quite functional, and add a good tactile feel, similar to that found on a MacBook. And I’ve got pretty big fingers, so if I can type on this, anyone can. 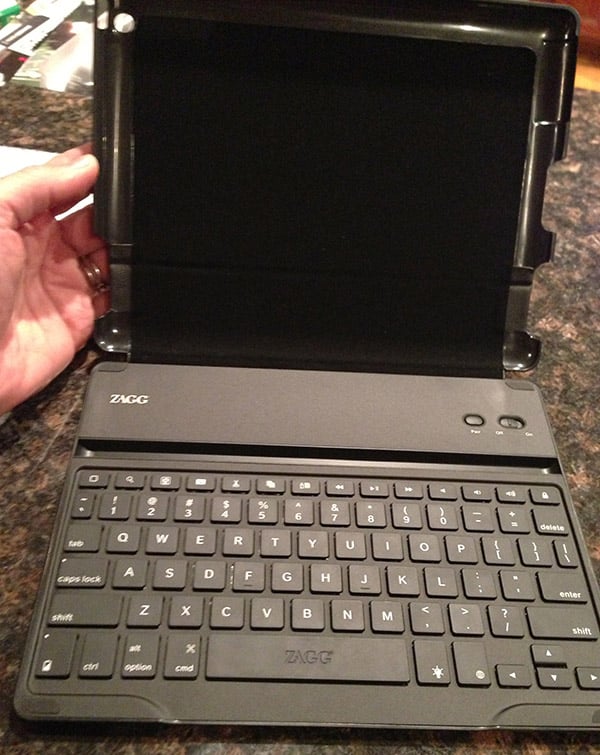 Another cool feature of the ProFolio+ keyboard is its backlighting. The keyboard has bright LED backlights which can be set to one of seven colors (my personal fave is the purple – it’s bright and looks cool) and three brightness levels. Simply press the lightbulb key to turn them on, and hold it down with the right or left arrow keys to change colors. Brightness is adjusted by tapping the lightbulb key multiple times. The backlighting is quite effective – in fact I’m writing this entire paragraph in complete darkness with no trouble reading the keys at all. And while the iPad screen itself provides some illumination for keys anyhow, the supplemental backlighting makes them much easier to see – and it just plain looks cool. 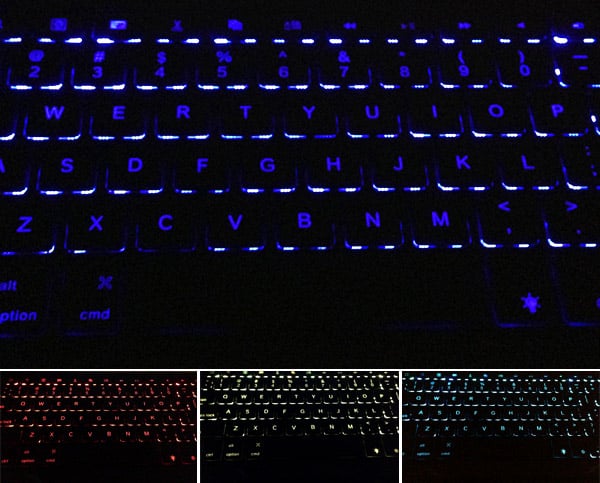 Across the top of the keyboard, you’ll also find dedicated function keys for the home screen, search, photo slideshow, cut, paste, copy, media playback and volume, as well as to lock the iPad. Unfortunately, the lock key is a little close to the smaller-than-normal delete key, so I did find myself accidentally pressing it once or twice, but quickly figured out how to avoid it once I realized it was there.

In terms of the case itself, it’s fairly non-descript on the outside, adding a layer of durable black plastic that  snaps onto the back of the iPad. When closed, the keyboard section acts as the front cover, and even has the proper magnets in it to put the iPad to sleep when closed and wake it when opened. When in keyboard mode, the iPad itself sits into a slot (in landscape mode only) providing a good angle for viewing the screen while typing. 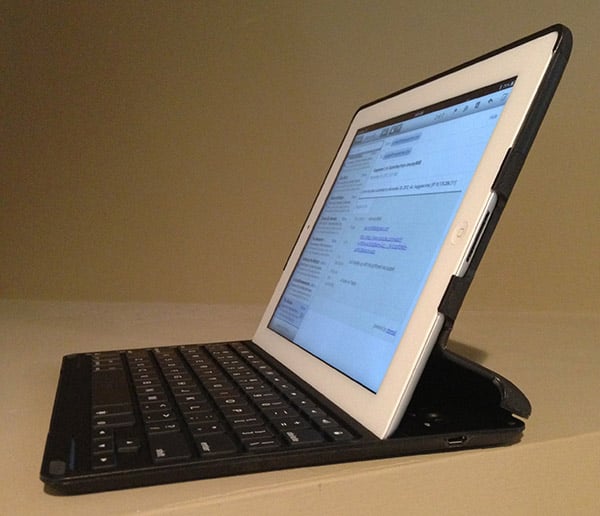 And this is where one of my only complaints about the ProFolio+ crops up – it only provides a single viewing angle. I personally found the angle to be a little too vertical for my liking  – but not to the point where it was uncomfortable. It’s just ideal for when you’re typing at eye level. If you try and use the iPad on your lap, the angle isn’t ideal. That said, I would prefer a design with a couple of additional slots, or some sort of mechanism to adjust viewing angle. You also really can’t effectively use your iPad in portrait mode with it, since you can’t rotate the screen while typing, and when you use it without the keyboard, the cover doesn’t flip around to the back, so you have to hold your iPad like a book. The case also adds a full pound of weight to the iPad, with most of that heft being from the battery, I’m sure. That said, the added weight didn’t really bother me. In fact, it just made it feel more sturdy to me.

Speaking of batteries, the ProFolio+ has a built-in rechargeable battery, which can be juiced up via a miniUSB connector, and the included USB charging cable. The keyboard’s battery should last you a couple of weeks between charges with normal usage, though the LED backlight will make things drain quicker. However, it does automatically go into power-save mode if hit hasn’t detected a key press in 60 seconds. There’s a handy power level indicator which can be activated with the push of a key, and it blinks to tell you how much juice you have left, and the backlight is automatically disabled when the battery level drops below 20%.

One other comment on the case itself – at first glance, the textured matte black plastic looks like it would scuff up pretty easily – but I tried pretty hard to mark it with my fingernails and by rubbing at it with no noticeable marks. That’s great, because I’ve had other things made out of a similar material, and they showed scuff marks without too much effort. That said, it does show dust pretty easily, so you may find yourself wiping it down with a damp cloth every once in a while. 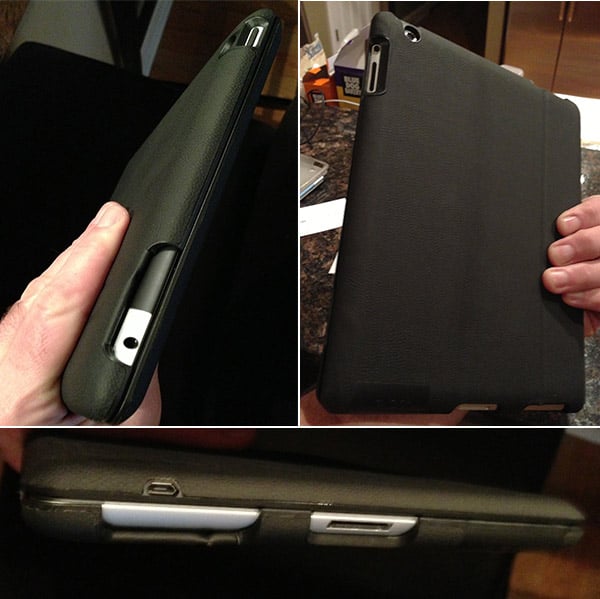 Overall, I really like the ZAGG ProFolio+. It adds a full Bluetooth keyboard to your iPad without adding too much bulk, as well as offering solid protection for the tablet. The keyboard itself dramatically improved my typing times from the on-screen keyboard, with the added benefit of extra screen real estate since the touch keyboard is hidden. The LED backlighting is very useful if you find yourself working in a darkened room, and like I said before, it just looks great. However, if you’re looking for a keyboard you can use in portrait mode, or want a wide variety of viewing angles, it might not be for you.

The ZAGG ProFolio+ iPad keyboard is compatible with the 2nd, 3rd and 4th generation iPad, and is available now for $129.99(USD). If you happen to buy one on Black Friday, you could even win a free iPad, as Zagg is giving away a free one every hour on their website, as well as a free pair of earbuds with every purchase over $19.99.