If you have a serious need to own your own pair of augmented reality glasses so you can pretend you’re Sergey Brin, Vuzix has a new set of AR glasses that are now available. 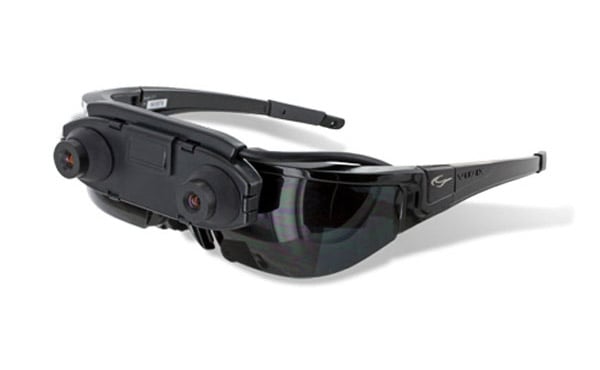 The Vuzix Wrap 1200AR glasses offer two small screens that combine to create a 75-inch virtual screen as viewed from 10 feet away. The glasses support both 16:9 and 4:3 aspect ratios and support display resolutions of up to 720p (though the actual display panels are 800×480 WVGA resolution). The displays have 60 Hz progressive scan update and a 35° diagonal field of view. The little screens also support 24-bit true color.

The glasses themselves weigh about 3 ounces and are highly adjustable allowing users to adjust the diopter and eye separation. They also have display angle adjustment and a pair of discrete 640×480 video cameras which can capture video at 30 frames per second. They’re loaded with a number of sensors including magnetometers, accelerometers, and gyros, allowing for full head tracking.

Despite being lightweight, this isn’t exactly a portable rig – they’re designed to connect to a computer via USB and VGA connections, and you’ll need some augmented reality applications in order to take advantage of them. But assuming you do all of this, you’ll soon be seeing stuff like this right before your eyes (and nobody else around you will.)

You need to have fairly deep pockets if you want to play with a set of these, because they sell for $1499 (USD). But then again, you don’t have a whole lot of cheaper choices unless Google actually releases their Google Glasses to the public.