Google presented the Glass’ funny younger brother at the 2013 SXSW multimedia festival. While the Glass was made to act like your butler, the aptly named Talking Shoe is meant to serve as your hype man. What? It’s not like everything Google does has to be useful. Remember Google Wave? Or the Nexus Q? The company has a sense of humor. 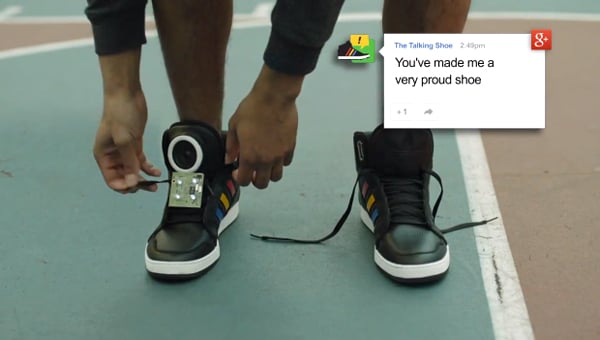 As is only appropriate for a talking shoe, its brains are mounted on its tongue. It has a pressure sensor, an accelerometer and a gyroscope to help it detect whether you’re stationary or moving about, and what kind of movement you’re doing. It also has a Bluetooth radio to help it connect to an Android phone or computer. Last, but not least it has a built-in speaker, which it does not hesitate to use. It can also broadcast its comments over the Web if you’re brave enough to allow it.

Google made the shoe in collaboration with interactive media specialists YesYesNo and the wearable tech enthusiasts of Studio 5050. Just in case you’re thinking that the video above isn’t for real, here’s a demo filmed by The Verge straight from SXSW:

Up next, Instagram’s Talking Fork.

[via Google via Inventor Spot & The Verge]