Mataerial Anti-Gravity 3D Printer is Literally Off the Wall

Remember the 3Doodler, which raised $2.3 million on Kickstarter last March? It’s basically a 3D printing pen that lets users create art and sketches in three dimensions. That, and the fact that you can use it for minor repairs using plastic, are what appealed most to backers. At least, for me anyway, since this was the first project on the site that I eventually backed because I loved the idea so much.

A gadget that follows hot on the heels of the 3Doodler is the Mataerial. 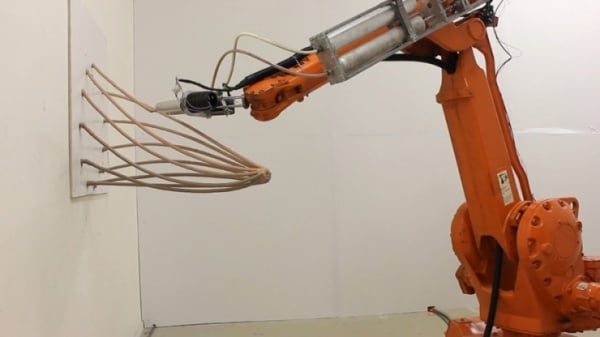 It’s not being touted as a 3D printing pen but a 3D printer. However, it’s not a device that’s meant to stand stationary on your desktop. Rather, it looks more like the 3Doodler, only it’s a larger and mechanically-controlled version, powered by an industrial robot arm. Where the products of the 3Doodler are meant to be raw, the products from the Mataerial are smooth and precise.

The latter also uses thicker layers of filament which create sturdy curved surfaces. It differs from regular 3D printers because of its capability to use surfaces with any inclination as its working surface – hence, giving rise to it being dubbed as the “anti-gravity 3D printer.”

Moreover, it extrudes 3D curves right off the bat instead of successive 2D layers to add more control in the fabrication process. It also comes with full color programming technology that allows dyes to be injected to the plastic to control the color of the formed path.

You can find more information about the Mataerial on their official site.