Your teenage child is too big – and cool – for the Kid’s Walker, but you don’t trust her with the Kuratas mech just yet. How are you going to retain your title of World’s Greatest Parent? Simple. With Sagawa Electronics’ Powered Jacket MK3 walking exoskeleton.

There’s only one problem: like the Kuratas, the Powered Jacket is either a promotional tool or an insanely expensive commercial product. 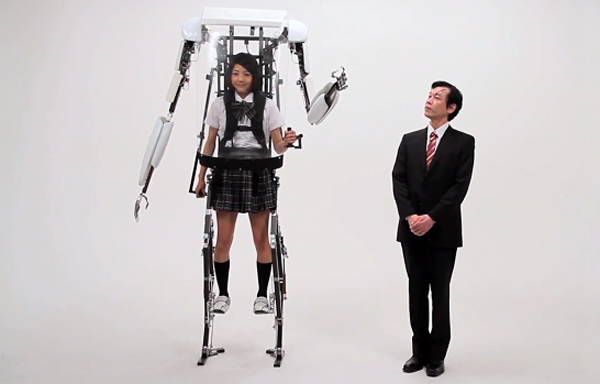 Allegedly, the exoskeleton is over 7ft. tall and weighs a mere 55lb. as it is primarily made of carbon fiber and aluminum. Its arms are controlled simply by moving the corresponding lever, while its legs are strapped to the wearer’s own legs. Apparently its fingers can also be controlled precisely. It also has a transparent canopy to protect the wearer against pedophiles. Now watch its demo video:

That was the best video I’ve in seen my entire life. Science fiction, comedy, drama and horror all in one. You can doubt the extent of Sagawa Electronics’ contribution to robotics, but its contribution to humor is the stuff of legends. As claimed in the video, Sagawa Electronics will supposedly make only five Powered Jacket MK3 units for the foreseeable future, with each one priced at ¥12,500,000 (~$124,000 USD). If that’s how much is needed for them to make another video, then folks I’m telling you that’s a freakin’ bargain.

[via Sagawa Electronics via Laughing Squid]