Ubi Interactive Now on Sale: Turn Any Surface into a Microsoft Surface

If you had your eye on Ubi Interactive’s multitouch software, you’ll be glad to now that it’s now on sale. For those unfamiliar with the product, sit back and relax. I’ll take you to a world where any surface can become a touchscreen. As long as you have a computer that runs Windows 8. And a projector. And a Kinect. For Windows. 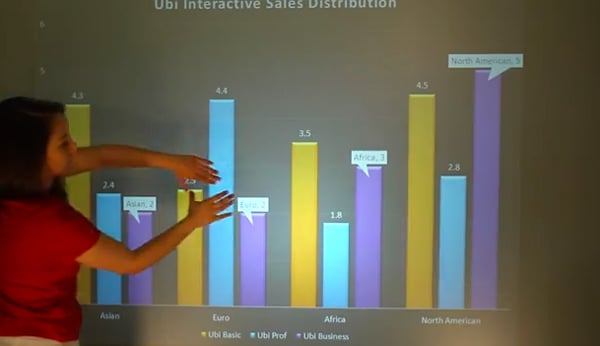 The Ubi program allows you to interact with Windows 8 programs from a projected display, as if your wall or canvas were a giant touchscreen. It uses Kinect for Windows – which is different from the one that works with the Xbox 360 – to map your fingers or hand and register their input.

Ubi Interactive says that Ubi will work with any projector as long as it has a “high enough intensity for the image to be visible in your lighting conditions.” The computer running Ubi doesn’t have to have a touchscreen itself. It just has to run Windows 8 and the resolution of the display being projected should be at least 720p. Its biggest restriction is that it will only work with Windows apps that have been optimized for touchscreens.

You can order Ubi from Ubi Interactive’s website; it costs between $149 to $1499 (USD) depending on the version you want. The Kinect isn’t included with the software, but then again the total cost of a Ubi setup is less than what you’d shell out for an actual wall-sized touchscreen.