Chewbacca Actor Gets New Knees and Hopes to Walk Again

I’ll readily admit to liking the Star Wars saga, they are some of my favorite movies (at least the first three).  Though I’m not such a hardcore Star Wars geek that I know all the actors that were in the original trilogy. Specifically, this may be the first time I’ve ever heard the name of the man who actually played Chewbacca, Peter Mayhew. 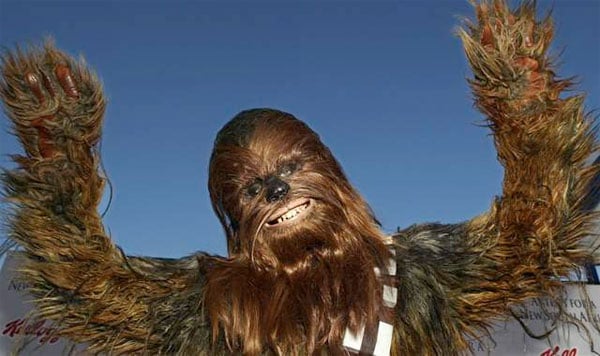 As it turns out, the 69-year-old Mayhew lives only a short distance from me in the Fort Worth suburb of Boyd, Texas.

One of things that landed Mayhew the part of playing the Wookiee was the fact that he is 7’3″ tall. Mayhew, who was born in England, suffers from gigantism. In his younger days he was able to play the part of Chewbacca, but as he aged he began to have problems associated with his condition. Reports indicate that the actor recently underwent surgery to have a double knee replacement after having to use a wheelchair for the last two years. He also reportedly had a tendon stretching procedure to help stabilize his legs.

Here’s hoping Peter a speedy and full recovery. Chewie won’t be the same without you!