One of the scary things about the asteroids that zip around our solar system is that scientists simply don’t know all of them that are out there. While the chances of a gigantic asteroid smashing into the Earth with enough force to wipe us out is slim, the Earth is pelted with smaller asteroids all the time. Just ask the Russians what sort of damage a small asteroid can make when it goes meteor and enters the atmosphere. 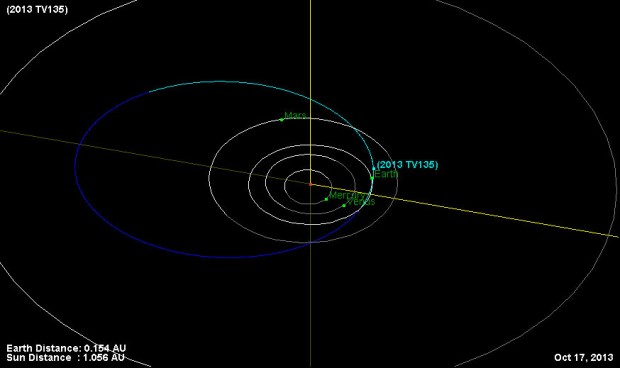 Another asteroid was recently discovered that passed impressively close to the Earth – on a cosmic scale. The asteroid zipped past the Earth in September but was only discovered this month. That means it made its close pass by the Earth and no one even knew it. Even more interesting is the fact that the asteroid’s orbit will bring the 1300 foot diameter projectile back to Earth in 2032.

Some early reports indicated that the asteroid has a chance of smashing into the Earth, unleashing a force of “thousands” of atomic bombs. NASA was quick to step in and put some of the fears to rest with the prediction that there’s only a 1:63,000 chance that the asteroid will hit the earth about 20 years from now. NASA went so far as to say that it was 99.998% sure asteroid 2013 TV135 will uneventfully zip past the Earth again in 2032. That prediction of a 1:63,000 chance doesn’t do much to make me feel better considering people hit the lottery every month with odds often much more remote than that.