A few months ago we checked out an iPhone case that had several add-ons with different functions. The Pivothead SMART glasses have a very similar feature. The glasses have two microUSB ports – one at the end of each temple – from which you can attach small accessories called Smart Mods.

Unlike Google Glass, which has a heads up display to present detailed visual information, Pivothead SMART uses LED guides to display notifications and other basic data. That’s because the glasses are not really designed to be wearable personal computers like Glass. Instead, they’re taking on wearable cameras like the GoPro (though to some extent Google Glass falls into that bucket as well). For starters, it has a camera with an 8mp Sony CMOS sensor that can record 1080p video at 30fps. It has still, burst and time-lapse modes and auto, fixed and macro focus presets.

By default, the Pivothead SMART has 16GB storage and a battery good for an hour of continuous video recording. Here’s where the Smart Mods come in.

The Fuel Mod is a battery pack that adds more power to the glasses, equivalent to two more hours of continuous video recording. The Live Mod adds a MicroSD slot, but that’s actually just a bonus feature of the add-on. The main feature of Live Mod is that it allows the glasses to stream full HD video via Wi-Fi to a desktop computer, mobile device or to the web.

Even though Pivothead wants to be the next GoPro, its Air Mod has the potential to make it more versatile. The Air Mod add-on has the same features as the Live Mod add-on – i.e. streaming and a MicroSD slot – but it’s also much more than that. It’s actually a tiny, display-less Android device, with a dual-core 1.3GHz ARM A7 CPU, WiFi, Bluetooth, NFC, GPS and a host of sensors. 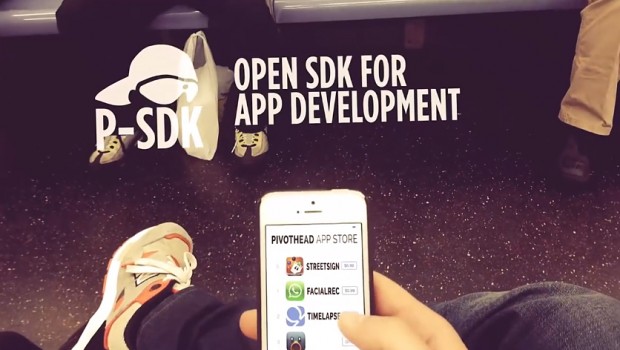 The idea is for developers to make apps that will run on the Air Mod, which will in turn enhance the functionality of the glasses. The video above showed a couple of concept apps for the Air Mod, such as a boarding pass scanner and an app that can analyze street signs.

Pledge at least $229 (USD) on Indiegogo to get a pair of Pivothead SMART glasses without any Smart Mods. You’ll need to pledge at least $409 to get the glasses and all three Smart Mods. The Smart Mods are also available as separate rewards. The Air Mod will – like any mobile device – live and die by its app ecosystem, but at least it’s an optional purchase. The glasses are still quite useful on their own.

Overall this seems to be a really promising device, but its makers need to find a way to explain its features to everyday consumers if they really want it to take off like GoPro cameras.

[Pivothead via The Droid Guy]