Laptops get thinner and lighter every year, but their power adapters are mostly still big and heavy. FINsix claims its Dart laptop charger is up to four times smaller and up to six times lighter compared to ordinary chargers. 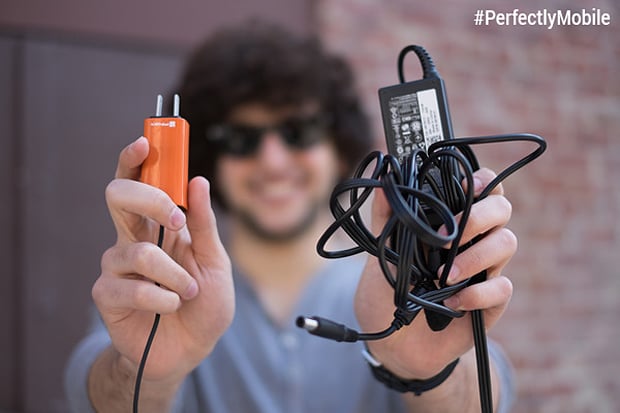 Dart uses what FINsix calls Very High Frequency technology to provide up to 65W of power. You can read more about it on FINsix’ technical report (pdf), though the word “technical” isn’t there for nothing. Note that 65W won’t be enough for all laptops – for example, Retina MacBook Pros use an 85W power adapter – but that will do for hundreds of other models. You can check this compatibility list (pdf) to see if your laptop will work with Dart. Dart also has a 2.1A USB charging port, so it can also replace your mobile device power adapter.

Plug a tiny browser to Kickstarter to support Dart. Pledge at least $89 (USD) to get a Dart that works with hundreds of Windows laptops. The MacBook-compatible Dart is at a higher reward tier – $148. FINsix says that they have to buy Apple’s power adapters to get parts for the Macbook-compatible Dart, hence the significant added cost for that model.