We usually see cosplays and replicas of fictional characters after they’ve become popular. But this astromech droid has been brought to life even if his show hasn’t aired yet. C1-10P aka Chopper is one of the lead characters in Star Wars Rebels, an upcoming animated TV series that takes place shortly before Star Wars: Episode IV. To promote the show, Lucasfilm created a real life version of the droid. 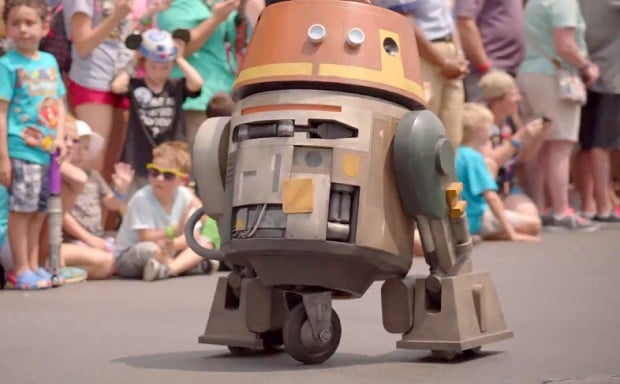 Lucasfilm spent a total of around 87 days working on the robot. Chopper’s design is based on Ralph McQuarrie’s early sketches for R2-D2. In Star Wars Rebels the poor rebels created Chopper using spare parts. As for his personality, the creators of the show said that if Artoo is a dog, Chopper is a cat. He doesn’t need your approval and he does things when he wants to. But ultimately he’s a loyal ally. You can learn more about Chopper by watching this video:

Here’s the real life Chopper, a remote-controlled robot with wheels, arms and a camera. Watch the video to see him hang out with Wall-E and Artoo.

Claptrap and Chopper would get along. You can see more of the grumpy droid when Star Wars Rebels launches this Fall.