If you can only have one compact speaker, the Creative SoundBlaster Roar SR20 might just be it. This impressively versatile speaker offers portability and room-filling sound, and can be used as both a wireless Bluetooth speaker and as a digital sound system for your PC or Mac. 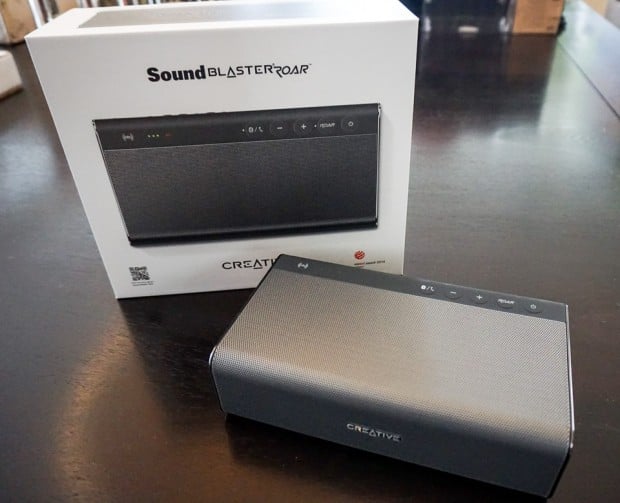 Measuring in at 7.9″(w) x 4.5″(d) x 2.2″(h) and weighing about a 2 pounds, 6 ounces, the SoundBlaster Roar packs a big punch in a small package. The speaker feels substantial and well built, and is loaded with features. Inside, the Roar has a pair of forward-firing 1.5″ full range drivers, along with a 2.5″ top-firing active driver which helps increase bass output and provide a wider soundstage. Passive radiators on each side further improve overall fullness. A bi-amplification system splits high and low frequencies to further improve clarity and dynamic range. 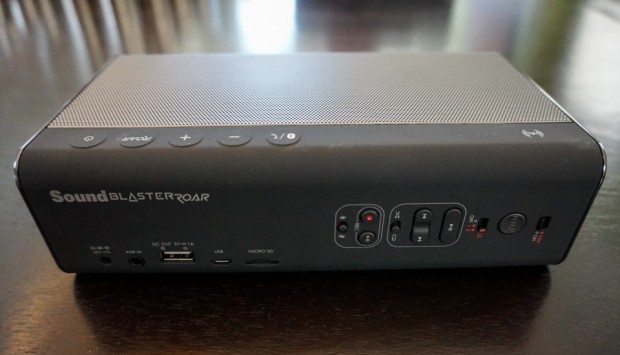 Controls for the speaker are split between the top and the back of the device. The top-mounted controls provide easy access to power, volume and a loudness control, dubbed “ROAR” – which increases output at the expense of battery life. ROAR mode definitely improves overall volume without distorting, and is even louder when the speaker is plugged into its AC power adapter. In addition to the ROAR mode, there’s a function called “TeraBass” which increases low-frequency response at low volumes – oddly, this feature isn’t marked on the case anywhere – you press the “Alarm” button when its not armed to activate it.

Connecting via Bluetooth is achieved with the simple push of a button, though it’s even easier if you’ve got an NFC-compliant device – just tap it on top of the speaker. The first thing I noticed when connecting the Roar to my iPhone was just how wide the soundstage was compared to other speakers of its size. This gets even better if you connect the Roar to your computer and use the SoundBlaster Control Panel to turn on surround mode. When testing with this Dolby Digital surround clip, it sounded like the audio was coming from well outside of the speaker. 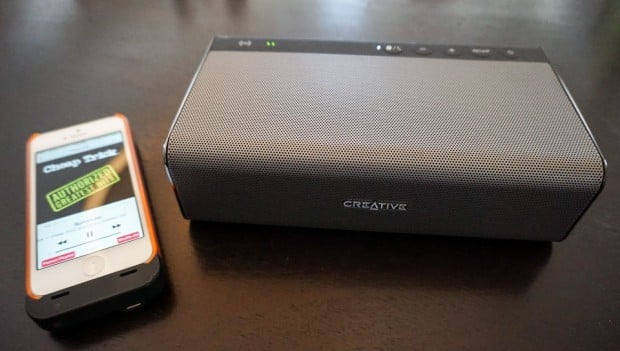 Sound quality is quite good for a speaker of its size. I had no problem filling a 15′ x 20′ room with sound, and without noticeable distortion. Bass is clean and punchy, and highs aren’t tinny in the least. That said, if you’re looking for a speaker with wall shaking bass, you’ll need to go with something bigger. You’ll also want to place the speaker close to ear level or above for optimal performance, as the soundstage and high end lose a little bit of edge if the speaker is placed too low.

In addition to its Bluetooth connectivity, the Roar has a micro-USB port for connecting a PC or Mac, a 3.5mm input for analog connectivity, and a microSD slot for playing MP3, WMA or WAV files directly from the speaker. You can also record voice clips to the microSD card thanks to a built-in microphone which helps perform double duty as the mic for its speakerphone functionality. Controls for the microSD card and voice recorder are located on the rear of the device though, which makes them a little clumsy to use. In keeping with its kitchen sink approach, the Roar also doubles as an emergency alarm, with an ear-piercing siren that can be activated by flipping a switch on back.

While you can always connect your computer using the 3.5mm input, connecting via USB provides improved sound quality, since its a straight digital connection. You’ll need to install the SoundBlaster control panel to take advantage of this ability though. Once installed, you get access to a variety of audio settings which dynamically process audio for different types of media, as well as to set equalization and surround sound intensity. 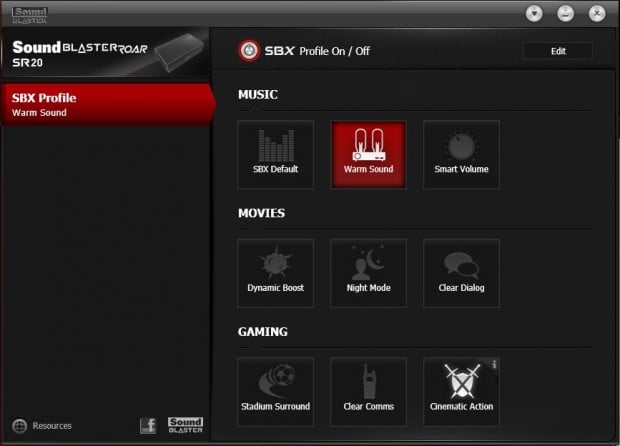 One item of note is that I was unable to successfully install the Mac OS version, but I’m running the OS X 10.10 Beta on my machine, so I’m going to chock it up to that. The Windows driver installed just fine on both my Windows 7 and Windows 8.1 PCs. One neat thing I figured out is that you can have a Bluetooth device and PC connected at the same time, and they’ll just be mixed together by the speaker. Neat. 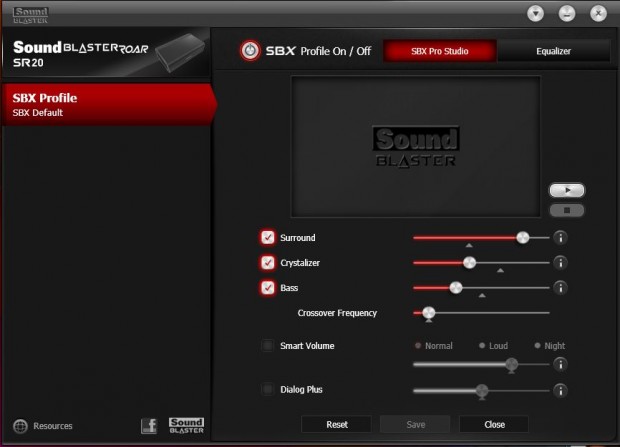 Battery life for the Roar about eight hours thanks to its large 6000mAh battery, and you can even take advantage of that battery to help juice up your gadgets in a pinch. Simply plug your mobile device into the USB port, and the Roar becomes an emergency charger. It should also be noted that if you use the included AC adapter, the speaker will recharge a bit faster than if you charge it via the microUSB port. 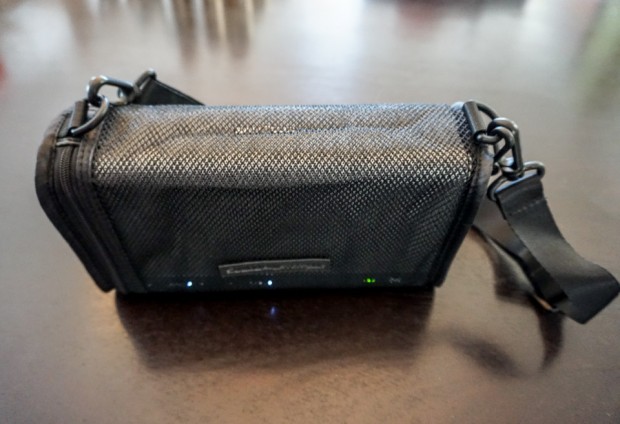 Creative also offers an optional mesh shoulder bag for the Roar. While it doesn’t really add much protection, it makes it easier to carry around, and is acoustically transparent, so you can use the speaker in the bag. 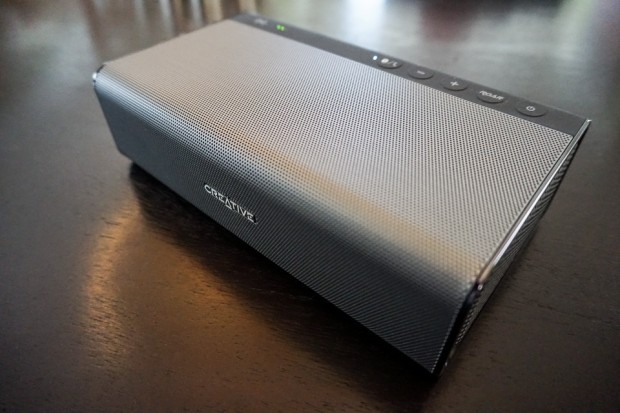 Overall, the SoundBlaster Roar SR20 is an excellent compact Bluetooth speaker, and extremely versatile. Sound quality is very good for its size, even at high volume levels. I’m especially impressed with its wide soundstage, Its ability to be used as a Bluetooth speaker, or as a sound system for your computer is a welcome feature, while things like microSD playback and voice recording might not get everyday use, but they’re nice to have. On the other hand, the ability to use the speaker as a charger for gadgets is great.