Arduino-Powered Bracelet Can Be Used as a Smartwatch, Plays Tetris

Earlier this year, we saw Kevin Bates’ Arduboy, a business card-sized gaming device powered by an ATmega328P Arduino board. He’s going to launch that device this December, but in the meantime he’s working on another Tetris-playing trinket, the Ardubracelet. 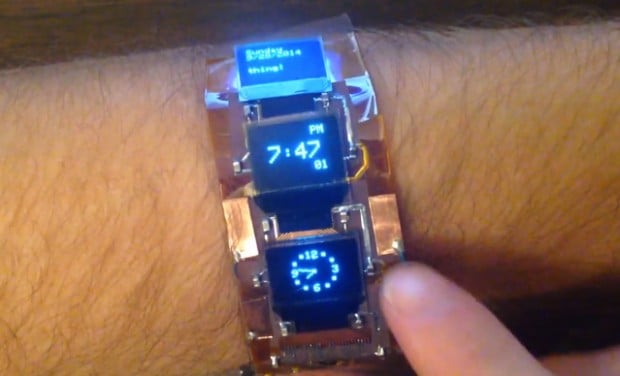 This very early prototype uses the same chip as the Arduboy. It has a flexible circuit board, three tiny OLED screens, capacitive strips on either side and a 10-hour rechargeable battery. Here’s Kevin demoing the Ardubracelet as a smartwatch:

Kevin is thinking of replacing the ATmega with one that has Bluetooth built-in, as well as embellishing the bracelet with 3D printed parts. Keep an eye on his blog for updates on the Ardubracelet.