Growing up, if a movie had Arnold Schwarzenegger in it I went to see it at the theater – assuming mom would get me into a R-rated flick. If not, I just wanted for it to come out on video and watched it on the VCR. Arnold was recently on The Late Late Show with host James Corden and the two of them hammed it up, acting out some of the most memorable scenes from his action classics. 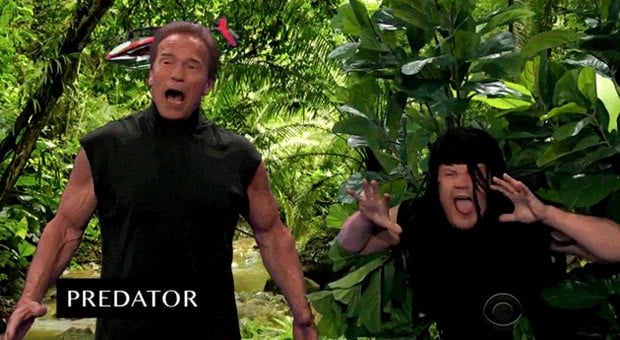 They don’t make action stars like Arnold any more. Check out the video and see the entire six minutes yourself.

That was hilarious. My favorite was the Predator with the drone and Corden acting like the dreadlocked alien screaming “GET TO THE CHOPPA!” Arnie has certainly aged a lot, but the good news is that he is clearly jacked and has been hitting the gym. A soft and flabby Arnold like the one we got when he was the Governator isn’t the Arnold I want to see.