It seems there are drones of every shape and size on the market these days, and while the larger models are designed primarily for aerial photography, the smaller models are mostly just for fun. TRNDLabs makes a number of small drones, with the SKEYE Pico Drone being the smallest of the bunch, measuring just 0.87″ square, and weighing just 0.25 ounce. 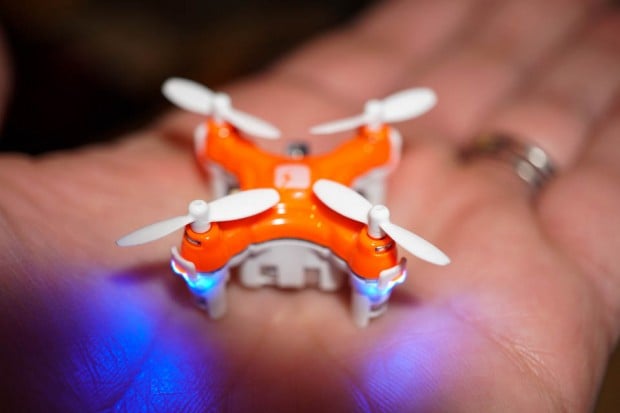 This diminutive drone is small enough to fit in the palm of your hand, yet is quite capable for its size. It’s even got cool LEDs for night time flights. The drone comes with its own dual-joystick controller, which doubles as a hangar for the tiny aircraft when not in use. 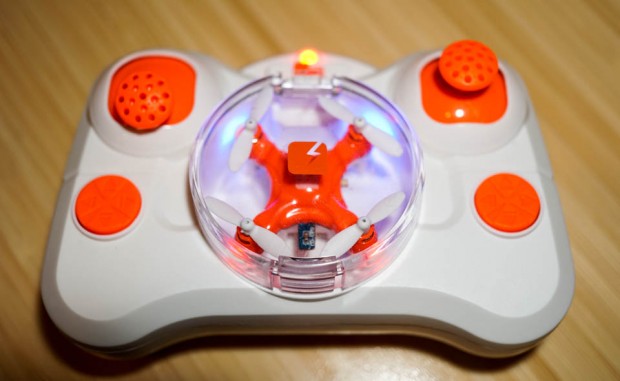 The controller runs on AAA batteries, while the drone itself can be recharged using a special USB cable that comes with it. Battery life for the drone is only about 7 to 8 minutes – enough to whet your appetite, but a limitation of its teensy size and feather weight. The controller works up to about 150 feet away, but the drone is so small, it’s tricky to spot if you let it get more than a few feet from you.

Flying the Pico Drone is pretty easy. Simply set it on a flat surface, flip a couple of controls to activate and calibrate it, and gently push up on the throttle stick to take off. It takes a few times to get used to the sensitivity of the controls, but once you get a hang of it, it’s not too bad. There are also three adjustable sensitivity modes, one for beginners, one for more advanced flyers, and a third mode called “headless” – which I found easiest, since the drone always flies in the direction you expect it to, regardless of its rotation, and assuming you take off with the drone facing forward. There are also simple controls for “trimming” the drone in the event that it likes to drift instead of staying on course. 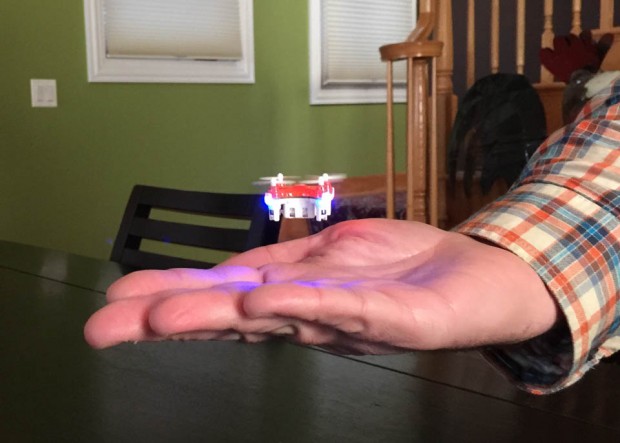 In addition to throttle, direction and rotation controls, you can also engage an automatic flip maneuver, by simply clicking the right stick, then pointing it in the direction of the flip. It’s super cool, and makes anyone look like a pro flyer.

One thing to know is that you will end up crash landing from time to time. It’s just the nature of learning to fly any drone that’s not fully automated. And when you do, expect to occasionally have a propeller pop off. These things are super tiny, so they’re pretty easy to lose. In fact, I lost two propellers in my carpeting the first day of flying. Fortunately, they give you four spares. Just be sure to attach them to the proper rotors, or you’ll be in for a speedy air disaster. That’s because two of the rotors turn clockwise, and the other two turn counterclockwise. 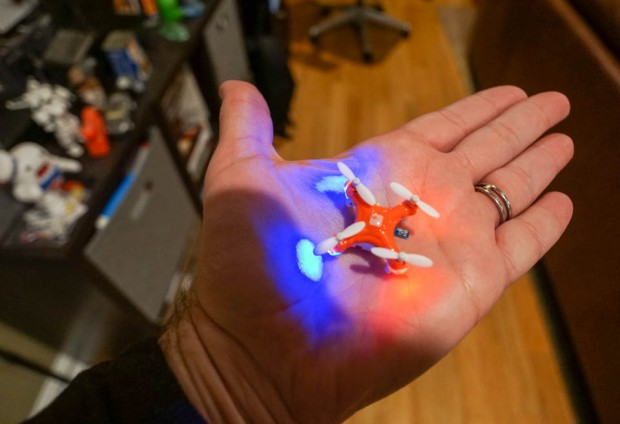 The SKEYE Pico Drone makes a great gift for any tech geek, and is a really fun plaything. I do wish the battery lasted longer, but there’s not much you can do with something this small.

You can grab the SKEYE Pico Drone for $49(USD) over at TRNDLabs. We’ve also got the matte black version of their slightly larger Nano Drone on sale in The Awesomer Shop if you’re thinking about a bigger model.