Voice-guided navigation makes it a lot easier for drivers to follow directions for map applications. But a group of Electrical & Computer Engineering students from Cornell University have come up with a more intuitive solution. They created a hat-mounted navigation device that guides you by producing sound that appears to come from the direction of your destination. 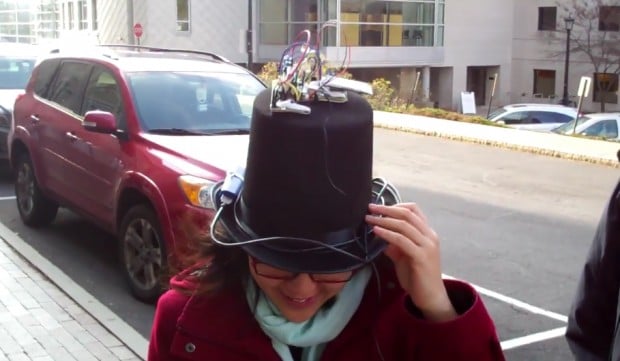 Abdurrahman Husnein, Sophia Yan and Vance Hancock’s goofy-looking device is managed by a Microchip PIC32 controller. A GPS module determines the user’s location while a digital compass figures out the orientation of the user’s head. The destination can be input and selected with the help of a TFT display.

The students’ program makes it so the generated tone would sound the same on both ears if you’re on the right direction. To indicate a change in direction, the program decreases and delays the sound going to the “wrong” ear, making it seem like the sound is coming from the direction you’re supposed to go. If you go in the complete opposite direction, the sound will switch to a higher pitch.

In the students’ tests, their map-gical hat was able to successfully guide four people, none of whom were told of the intended destination. Its simple sound is intuitive and can be understood regardless of the user’s language. That said, the device is far from perfect. It doesn’t take paths or obstacles into account, which means a blind person can’t use it. It also doesn’t tell you when you’ve arrived at your destination, but it is a student project after all. Overall I think Abdurrahman, Sophia and Vance did a great job. You can read their full paper on Cornell’s website.