I used to get so excited growing up when we were going out to McDonalds. It was really all about the fries and the playground for me. Today going to McDonalds means that I’m broke and in need of a cheap hamburger to avoid eating that crappy turkey sandwich I packed for lunch. I’ve always wondered exactly what was in the food at McDonalds that has made it so consistent over the years. One dude came up with the random idea of pouring molten copper on a Big Mac to see what might happen to its two all-beef patties, special sauce, lettuce, cheese, pickles, onions on a sesame seed bun. 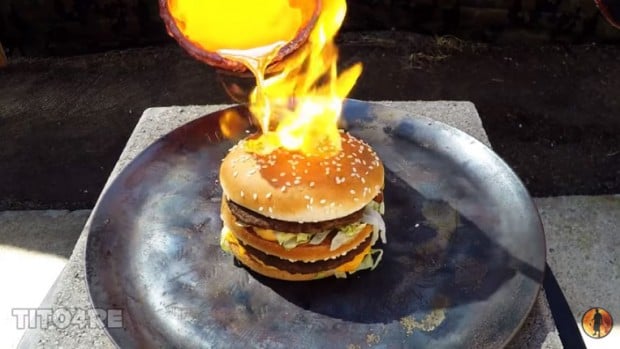 As it turns out it is rather hard to destroy a Big Mac with molten copper. The Mac has to be taken apart before it really starts to give in to the copper.

This seems like a waste of some copper that has to be worth a good bit of money to me. The video is fun to watch, at least if you can see through the smoke.