HP takes on rivals Microsoft and Dell with its latest 2-in-1, and it looks like they’ve got a winner on their hands. The HP Elite x2 1012 G1 combines style, functionality, build quality and versatility in a single package. This compact PC is targeted at today’s on-the-go businesspeople, who want the ability to work anytime, anyplace. 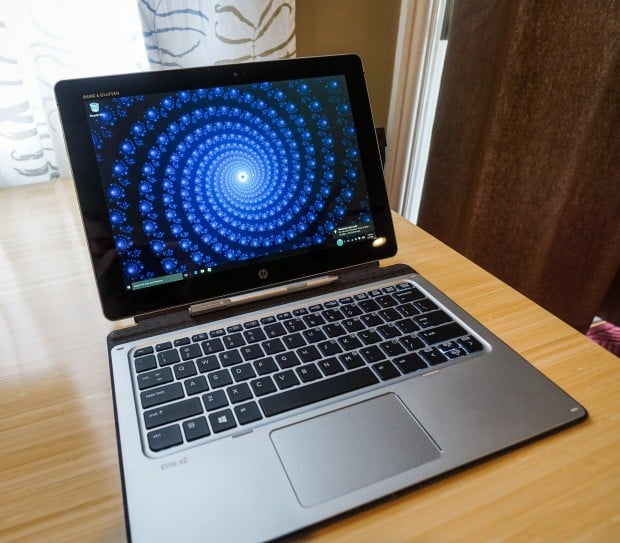 With stiff competition like the Surface Pro 4 and the Dell XPS 12, the Elite x2 1012 G1 has a steep hill to climb, and with few exceptions, HP has risen to the challenge. For starters, HP knocked it out of the park with their industrial design. The Elite x2 offers excellent build quality with a body made from sturdy aluminum, and a built-in kickstand that simply works better than others on the market. I appreciate the simplicity of its design and the ability to adjust its screen to just about any angle you could possibly want. 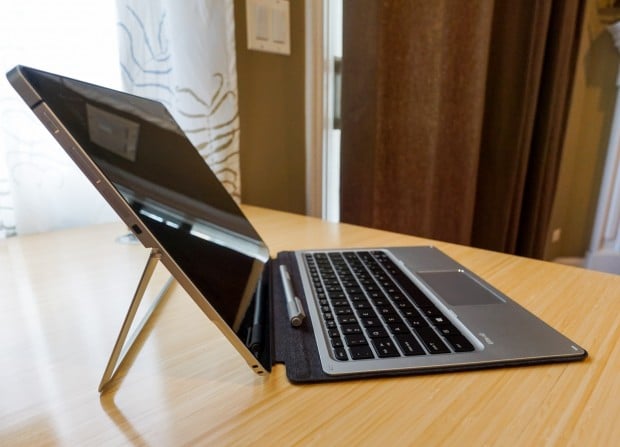 The system itself is extremely light and easy to carry, weighing in at just 1.8 pounds, and measuring just 0.3″ thick. The keyboard brings the total system weight up to 2.65 lb, and 0.5″ thick. Plus, it’s whisper quiet – and has no thermal openings or noisy fans.

The purchase price of the Elite x2 also includes a slimline backlit keyboard which offers excellent keys that really feel like a proper laptop rather than an afterthought. The keyboard is also exceptionally stiff and doesn’t move around on the desktop, and magnetically attaches and detaches for ease of use. 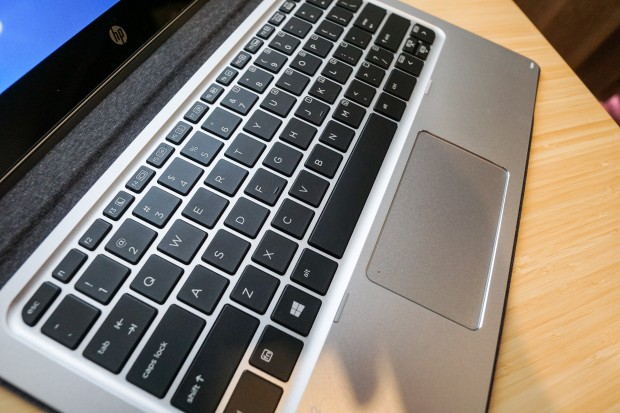 Of course, one of the benefits of a 2-in-1 is its ability to double as a tablet. You’ll need to detach the keyboard when using it in this mode, as it doesn’t really like being flipped around to the backside. It’s a minor annoyance, but it would have been nice to be able to keep the keyboard attached even in tablet mode. When you do remove the keyboard, one of Windows 10’s neater features kicks in – Continuum, which makes it easier to use the interface using touch and gestures. 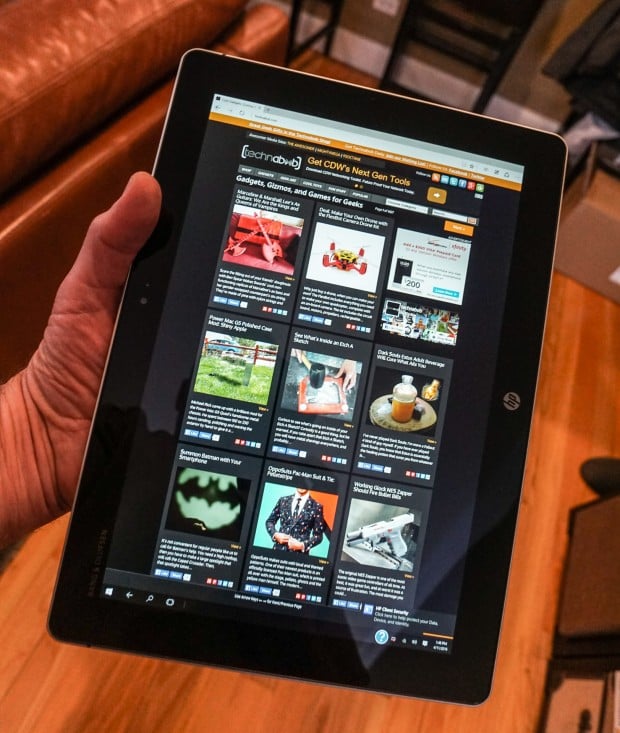 The 1080p display is bright, and offers sharp and clean text, and is protected by Corning Gorilla Glass 4 tech. While it can’t keep up with the resolution of 4K displays offered on some of its competitors, it’s more than sufficient for most purposes, and you get the added bonus of better battery life. Speaking of battery life, you’re looking at somewhere right around 10 hours under normal use.

The Core m5-6Y54 CPU inside the Elite x2 is plenty fast for business and productivity tasks. Fresh from the factory, it scored 5712 in the multi-core and 2952 in Single-core Geekbench tests for me. Despite having the same CPU, the Elite x2’s multi-core tests outpaced the Dell XPS 12 by 19%, and my older Atom X7-powered Surface Pro 3 by the same margin. HP says it also beats the Surface Pro 4 by about 8.25% according to PCMark. Like anything, your mileage may vary in real world applications. 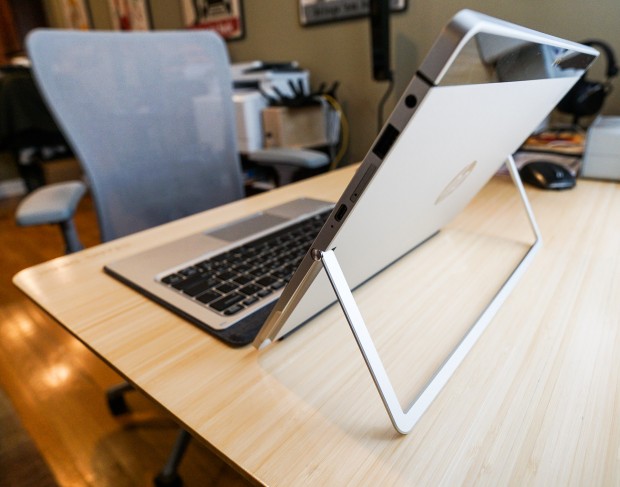 There’s a built in USB-C port that supports Thunderbolt, though it doubles as the power port, so you’ll need to buy an adapter or a dock if you want to use it to connect other devices at the same time. Fortunately, there’s still a single USB 3.0 port. There’s also a MicroSD media slot which supports up to 200GB of extra storage via a microSD, microSDHC or microSDXC card. While you probably won’t use the 5MP rear-facing camera that often, the 1080p front-facing camera will come in handy for Skype sessions.

HP is also kind enough to bundle in a Wacom-developed digitizer and pen, which provides excellent functionality for sketching, painting and other creative applications. If you’re an artist or draw as part of your job, you’ll love this feature. The stylus is fast, precise, and offers excellent pressure sensitivity. 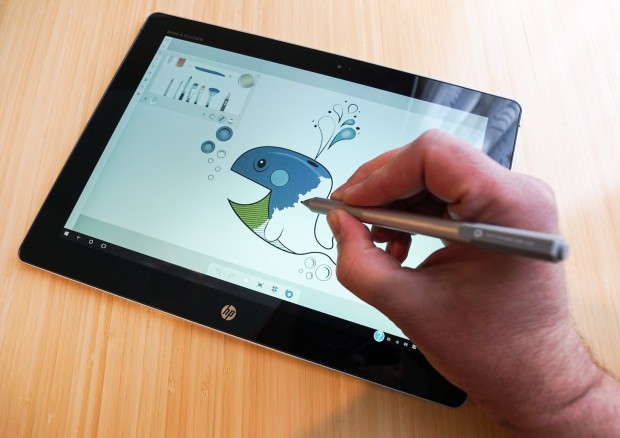 HP also includes a couple of stick-on pen loops for storing your pen, but I found that the magnets on the left edge cover actually provided a surprisingly good hold – even if that’s not what they were officially designed for. Speaking of the cover, it’s covered with a nice grey felt-like material that feels like it should hold up pretty well over time. 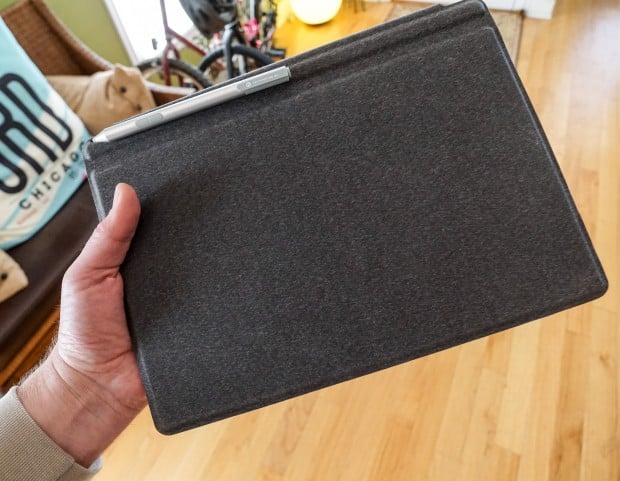 In addition to the aforementioned features, the Elite x2 is designed for serviceability. Companies that belong to HP’s Self-Maintainer program can easily open it up, and swap out many of the major components themselves – a rarity in today’s ever smaller and thinner devices. HP also makes it easy for IT administrators, with features like remote and self-healing BIOS management, and business-class security and authentication tech. The built in fingerprint reader lets you log in with your fingerprint instead of a password. 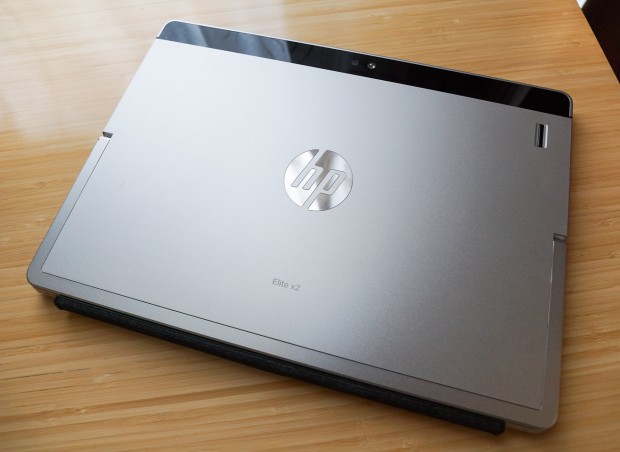 Overall, the HP Elite x2 is an excellent Windows 10 convertible, with a smart, high quality hardware design, performance that beats its closest competitors, an excellent bundled keyboard and pen, and maintainability that should benefit IT managers who have to administer multiple systems.

FTC Disclaimer: Technabob was provided with the hardware tested in this review by HP at no cost. However, all reviews on Technabob are the unbiased opinions of our authors, and in no way represent the views of the product manufacturers represented here. 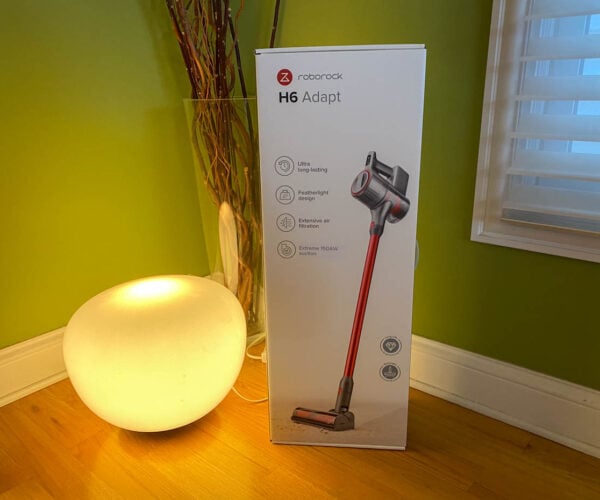