One of the keys to having fun camping is being comfortable. It’s easy enough to be comfortable inside the tent – all you need is one of the plethora of available thin inflatable mattresses to lay on. What isn’t so easy to do is to get comfortable on breaks during your hike out to a camping site or around the fire at night. If you are car camping, you can just trot your chairs out and have a sit.

If you have to schlep stuff away from your car, carrying a few of those collapsible chairs can be a real pain, and they aren’t very comfortable to sit in. This is where Koze comes in. 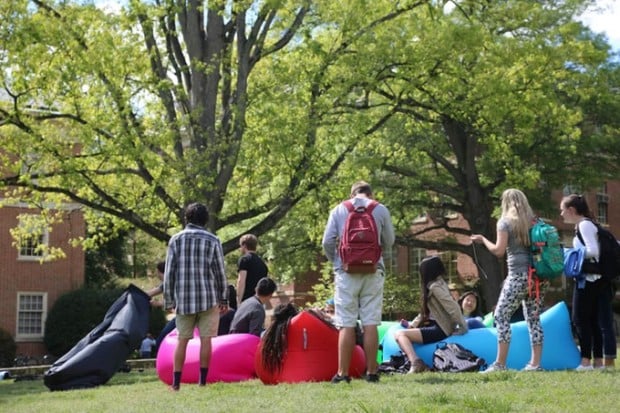 The Koze is an air inflatable hammock or couch that multiple people can sit or lay on. They look very comfortable indeed and they collapse down into a small bag that weighs about two pounds. It’s made from parachute nylon and promises to stay filled for up to six hours and holds up to 400 pounds. It looks a bit bulky for minimalist backpacking trips, but it’s still way better than a hammock, which is bulky and you have to find a campsite near trees. Of course, it’s not just for camping either, and you can use it pretty much anywhere you need an impromptu seat.

It’s made from parachute nylon and promises to stay filled for up to six hours and holds up to 400 pounds. The project is on Kickstarter right now. Its makers were seeking to raise just $4,000, have has raised over $50,000 at the time of writing. A pledge of $60 will get you a Koze with shipping set for June 2016.