If you find yourself outdoors a lot, you can often find yourself without the power you need to keep your gadgets charged up. If you’re looking for the ultimate way to ensure you never run out of juice, check out the Renogy Phoenix Generator. This briefcase-sized device provides a portable power station for your phones, tablets, laptops, and other electronic devices. 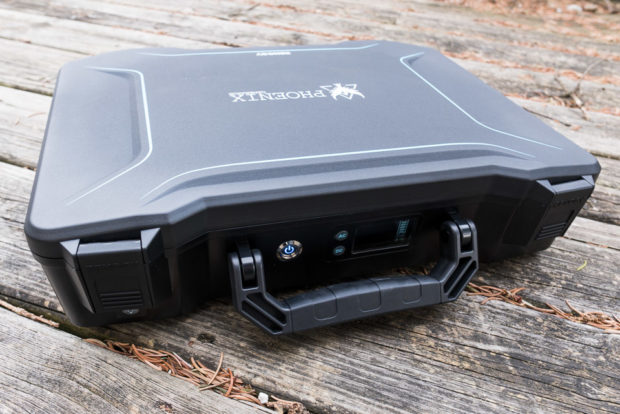 Weighing in at 12.8 pounds and measuring 16.24″ x 11.95″ x 3.94″, it’s definitely not something you’ll just throw in your suitcase, but it’s definitely not a bad idea to pack in your trunk if you go camping, or plan on participating in any all-day outdoor activities. Inside, there’s a 16Ah/14.7-volt lithium-ion battery pack that can push out up to 9 amps of current. That’s enough juice to charge an iPhone 6S or 7 up to about 32 times, a GoPro 47 times, or an iPad Air 2 about 8 times. 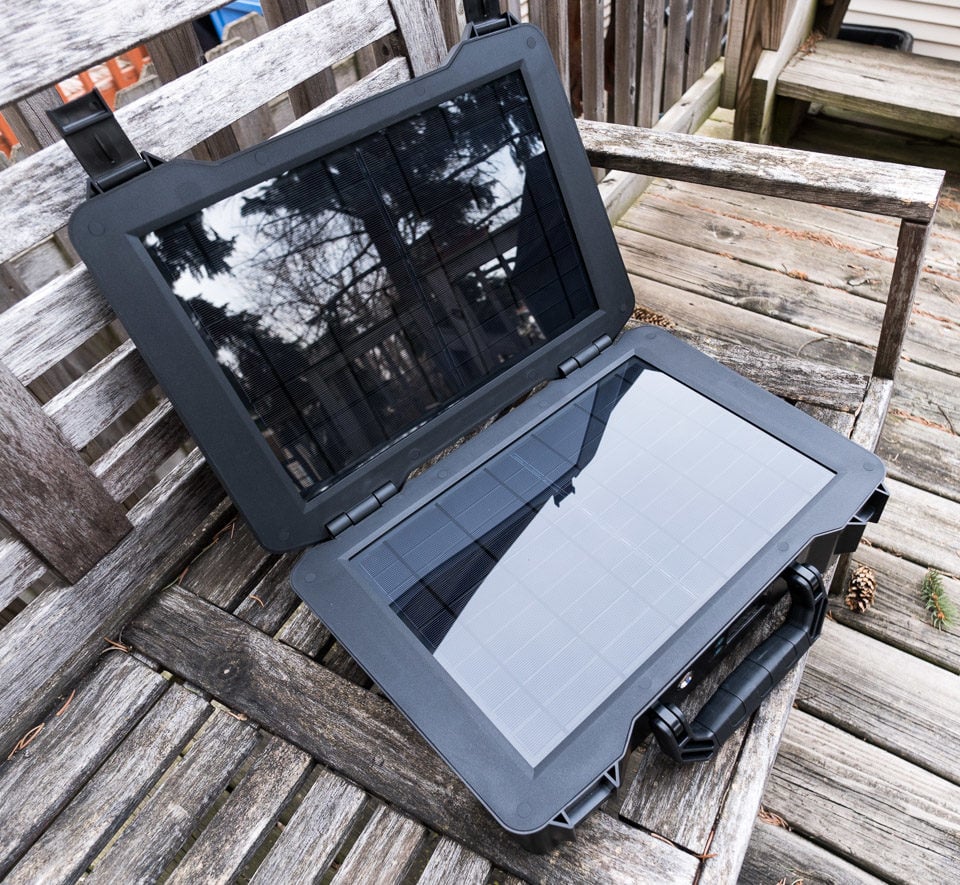 While you can recharge its battery pack using a standard AC outlet, or a 12VDC cigarette lighter socket, it’s also feasible to recharge the pack using solar energy. The built-in solar panels can fully recharge the pack in as little as 10 hours in bright sunlight, though clouds or shade will impact recharge time significantly. In my testing, I was able to add about 3 to 4% of charge every 30 minutes on a partly-sunny day. If you want to charge faster, you can purchase add-on solar panels in sizes from 10 watts to 100 watts. These can be used in concert with the built-in panels to significantly accelerate recharging. 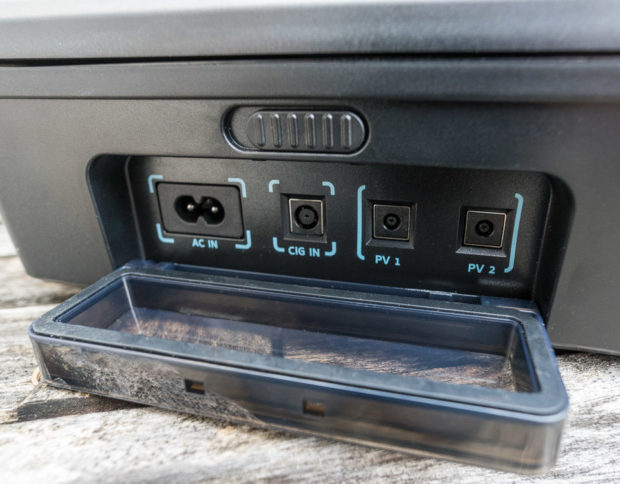 The Phoenix Generator packs plenty of outputs for your devices, including four 2.4 Amp USB ports, a 12VDC cigarette lighter output, a pair of 12VDC plug connectors, and a 110VAC 3-prong outlet connected to an internal power inverter. You can charge both AC and DC devices at the same time if you so choose. 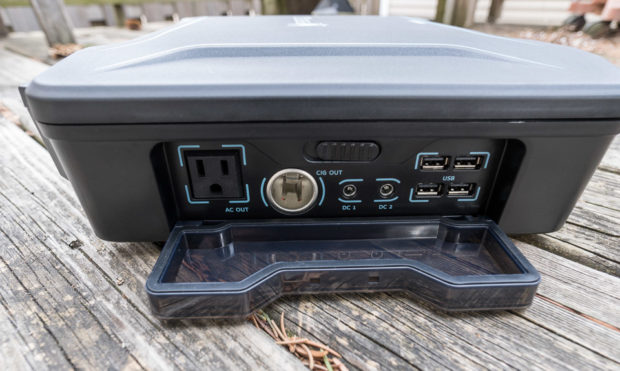 The latter port is great for recharging laptops on the go. Depending on the size of the battery in your laptop, you can fully recharge it anywhere from about 3 to 5 times. When I plugged in my DELL XPS 15 laptop, the internal cooling fan on the Phoenix kicked in to help regulate its temperature – a safety protocol I’m happy they’ve built in. 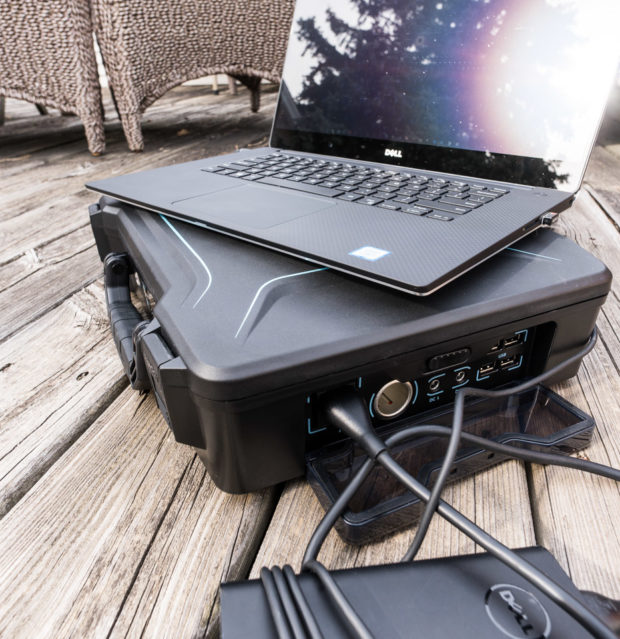 Renogy’s tech specs say the Phoenix meets UN DOT 38.3 standards for transportation safety, but I do wish that it was also UL certified. Since you’ll be toting around a rather large amount of lithium ion batteries in a case, I’d love to see them earn that certification.

The Phoenix includes a couple of other handy bells and whistles, including a bright 3-watt LED flashlight that’s located in a convenient forward position when carrying the briefcase. 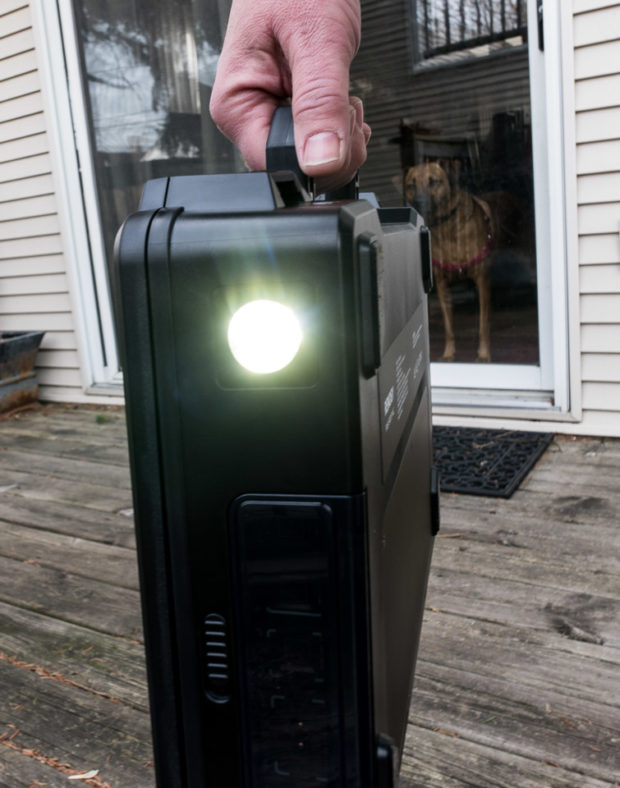 They’re also kind enough to toss in a special cable you can use for connecting a lightbulb to the briefcase. This could come in handy for illuminating dark locations at night, but what was confusing to me is that the only place to plug in the cable is one of the 12VDC port, but most standard E26-base lightbulbs expect 110VAC. I decided to give it a whirl with a spare LED lightbulb I had lying around, and it worked fine, but I’d like to see this documented better in the manual. 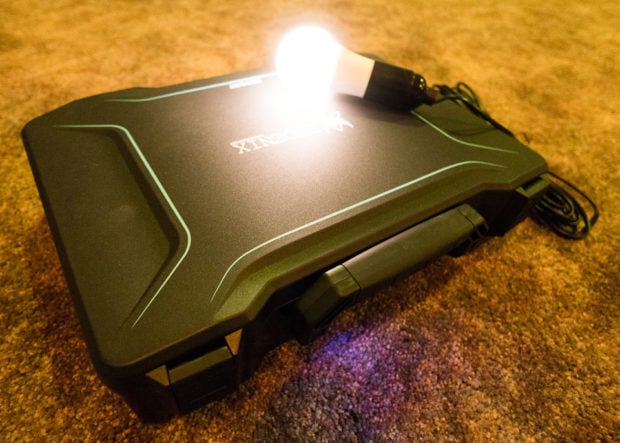 The Phoenix Generator works as promised, and does a great job providing a ton of power for anyone on the go. It retails for $699.99(USD), and you can add a 60-watt folding solar panel for about $200. 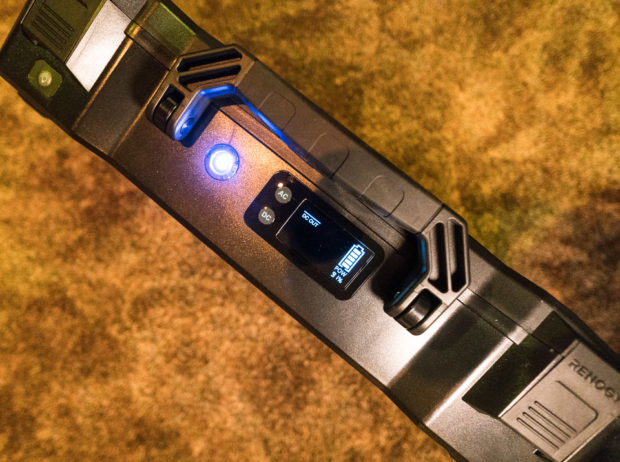