If you’ve ever wanted to build your own Formula 1 race car out of coke cans, this cool video will show you how. The Q channel recently built a giant Coca-Cola F1 race car using Coke and Coca-Cola Light cans, PVC pipe, and glue. All pretty simple materials to work with. 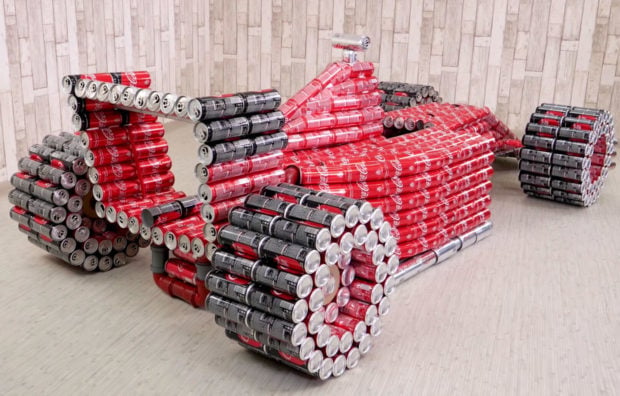 I would have built the entire thing out of Coke cans though because everyone knows that the diet stuff isn’t as fast. Strike that. I would have used Monster Energy drinks because those will get your heart racing, so they are obviously the speediest. Anyway, it took The Q almost 1000 empty coke cans, 5 different types of glue, over 12 meters of PVC pipe, and over 400 man hours to build this thing.

The scale of the car is roughly 1:1.5 scale compared to the original F1 car. The final result is a very cool and detailed work of art that will NOT stand up to a crash at all. It won’t even stand up to someone getting in it, or even being breathed on the wrong way. It’s still pretty awesome though. Is it bad that I want to see it crushed in a real race? I know, this is why I can’t have nice things.