Toyota’s TILT Lab is a Maker Space for Manufacturing Ingenuity

I recently had the opportunity to visit Toyota’s largest vehicle production facility in the world, the Toyota Motor Manufacturing Kentucky (TMMK). While there, I not only got to see how humans and machines work together to make about 2000 cars per day, but learned a bit about the magicians who pull the strings behind the curtain of a car factory, the production engineering team. These are the brilliant minds who figure out how to take the designs and specifications for a vehicle and actually put it into production at the plant. 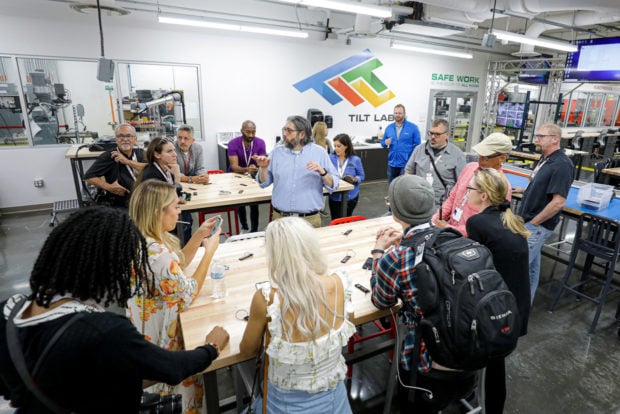 Production engineers must use their smarts and every resource available to come up with ways to build cars safely, quickly, within budget, on time, and with exceptional quality –  all at very high volumes. This is no small task, and to help with their efforts, Toyota recently invested more than $80 million USD on a brand new Production Engineering and Manufacturing Center (PEMC). The facility houses the team right next door to the factory, and provides expansive floor spaces for testing out technologies and techniques for welding, plastics, painting, building powertrains, and more before they hit the assembly line. In addition, it features a wonderful tool for empowering creativity and ingenuity – an on-site maker space known as the TILT Lab. 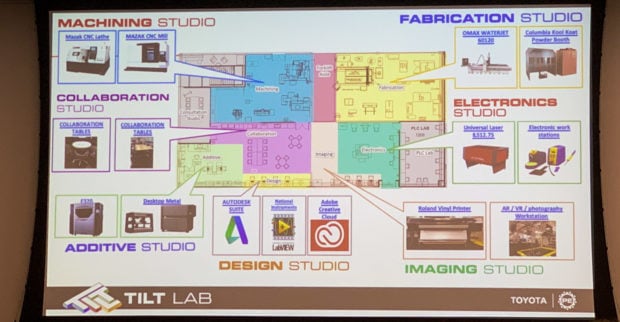 The 7,000 square foot facility is packed with modern tech that helps reinforce creativity and forward thinking, and currently has 27 pieces of equipment for rapid prototyping like laser and waterjet cutters, 3D printers, CNC milling machines, and more, and is staffed by a team of 10 technicians, engineers, designers, and interns. 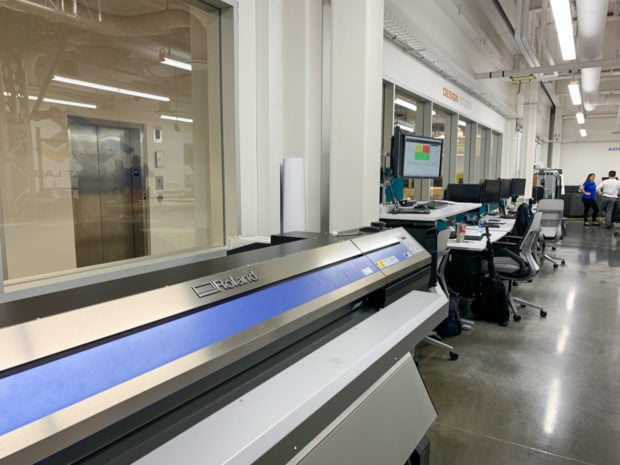 Virtual reality and augmented reality tools are also on hand, and are also used for testing out new production techniques, as well as to visualize how parts might fit together on the line, or how production equipment might fit on the factory floor. This can save significant time and cost when it comes to moving from virtual reality to actual reality. 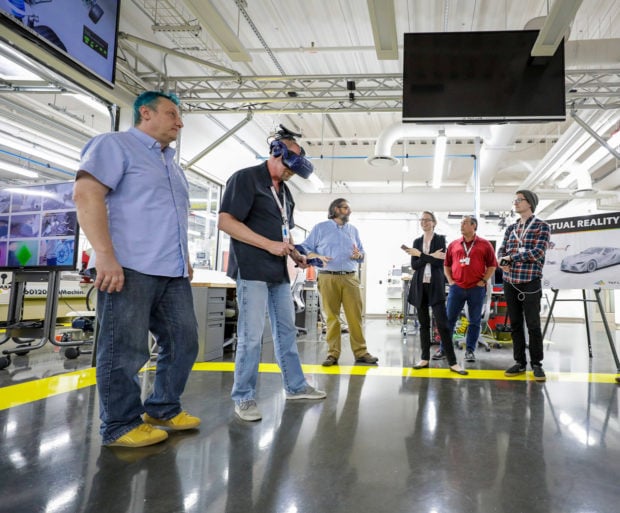 AR tech is also becoming an invaluable training tool, allowing students to practice and refine their production skills like welding and painting in a safe classroom environment. The TILT Lab is testing and refining these technologies, and seeing how they might be useful in a larger training setting. 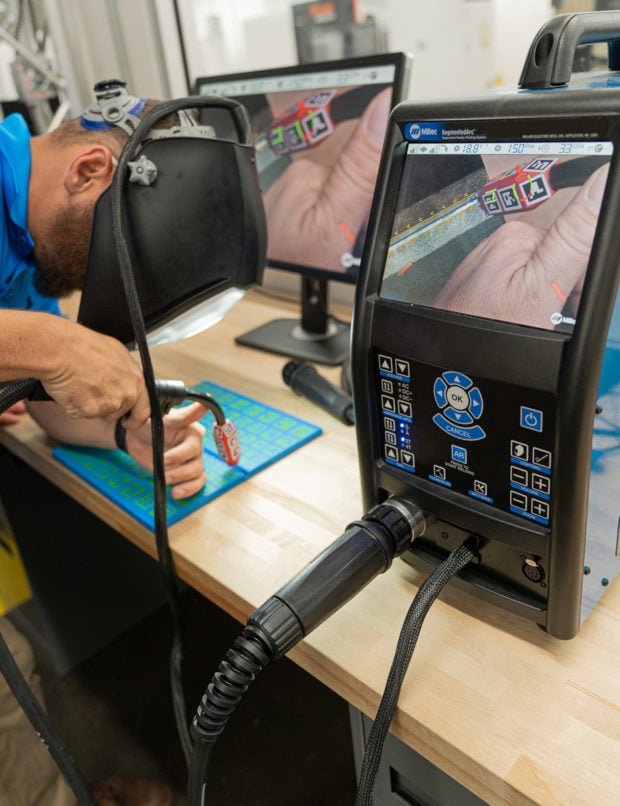 There are several pieces of high-end additive manufacturing gear on site, which allow engineers to rapidly fabricate prototypes of parts and tools that might be used in production. The machines on hand can print in a variety of materials, including hard and flexible plastics, and even carbon fiber reinforced plastic. I was especially impressed with their ability to print things like hoses that actually flex like the real deal, as well as multi-material parts. 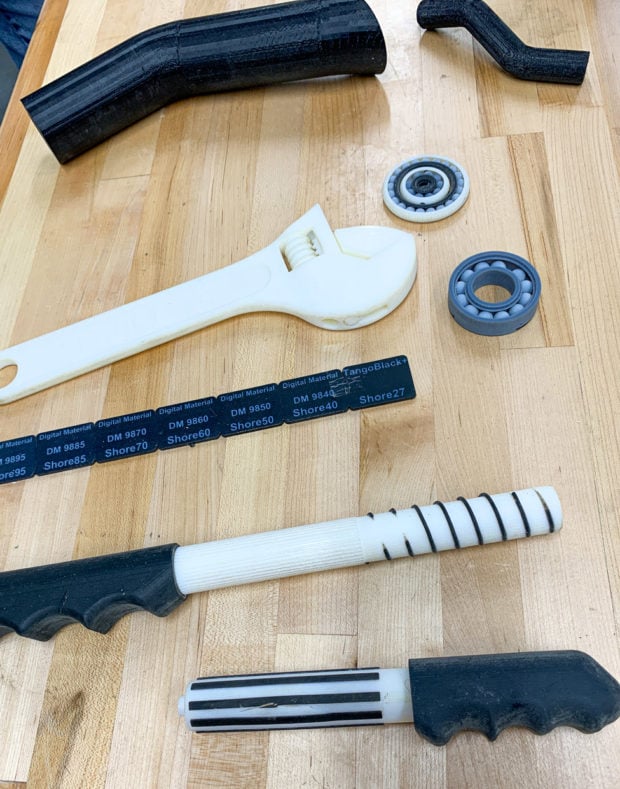 In addition, there are two roomfuls of CNC machining and fabrication equipment, including a lathe, a mill, and a waterjet cutter for slicing through materials with ease. They also have a laser cutter/engraver, a powdercoating booth, a vinyl cutting machine, and plenty of power and hand tools on hand. 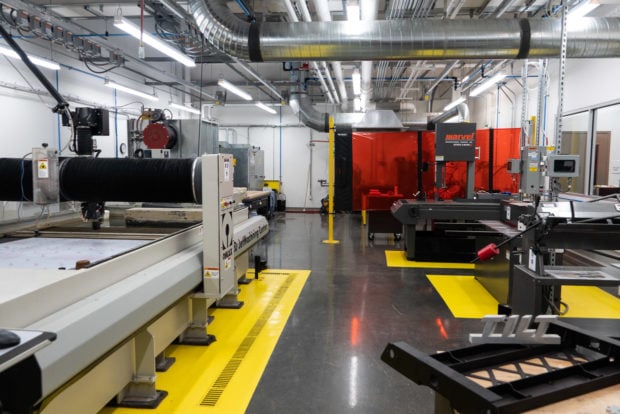 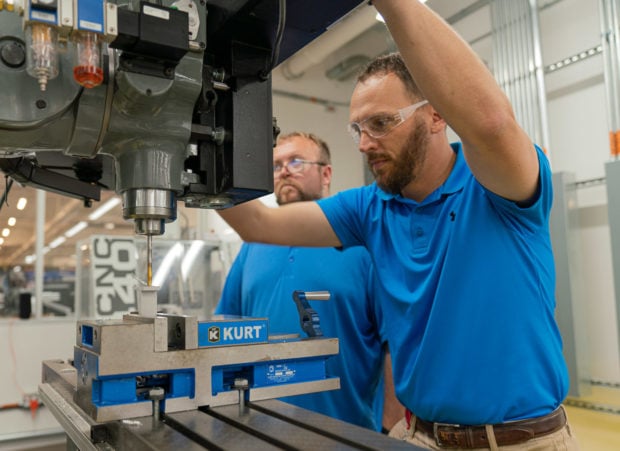 One of the niftier things the PEMC team has implemented is an authentication system which requires that users scan their badges to ensure they have the training required to use a particular piece of equipment before the machine can be used. They developed this application in-house, and it’s designed to ensure the safety of the team, as well as to protect the valuable equipment from damage. It’s even capable of paging an available team member with the proper training if the user needs help. 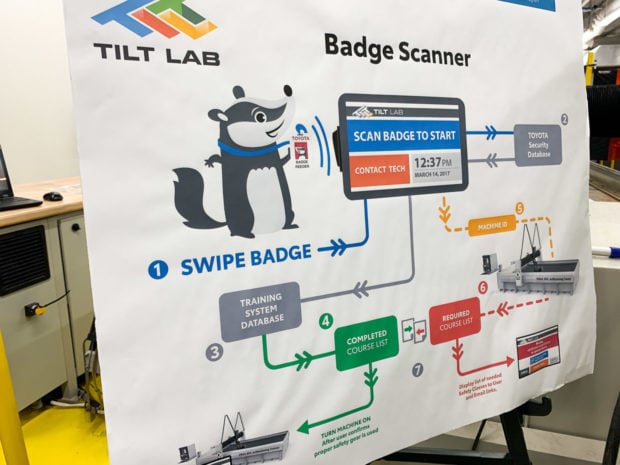 The TILT Lab is also experimenting with modern robotic systems called “co-robots.” These easy-to-program automatons are designed to work side-by-side with humans. They have on-board sensors that make them aware of their surroundings, and can immediately react, slow down, or stop in the event that a person accidentally comes into contact with them. Traditional industrial robots have much more limited safeguards, and generally have to be kept behind safety enclosures to protect humans from injury. 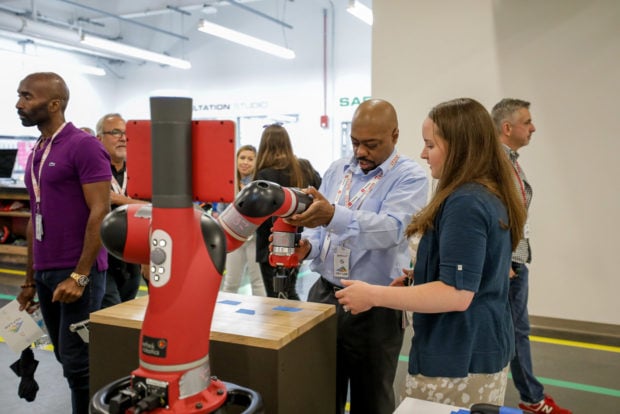 I’ve been to a few publicly-available maker spaces over the years, and the equipment on hand at Toyota’s TILT Lab is generally of a more professional grade than I’ve seen in those venues, plus it’s just awesome that it’s right on site next to the manufacturing facility. Backed by a talented operational team, the lab provides engineers with the best and latest technologies for improving operations at the factory next door, and at other Toyota plants around the globe. 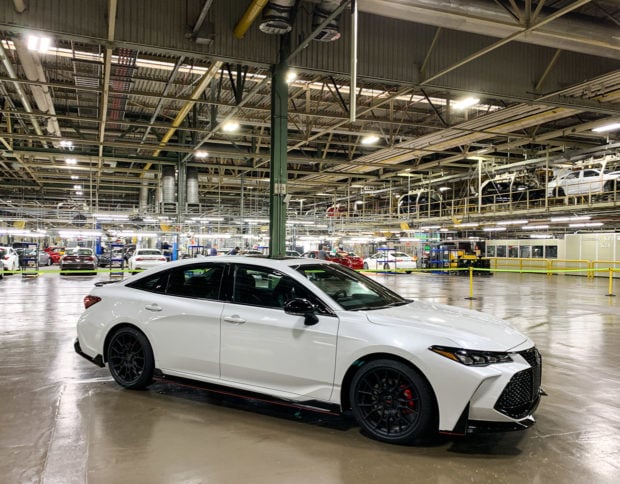