Unless you’re talking about a Keytar, most guitars are played using strings and frets. But this unique electronic instrument has neither of those. Instead, it’s played using a barcode scanner. 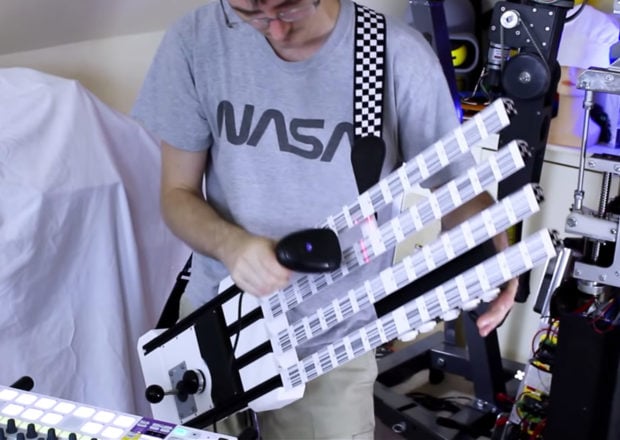 Maker James Bruton built this unusual electronic guitar that’s covered with barcodes on its four necks. It’s played by pointing an off-the-shelf barcode scanner at its labels. The key to the system is an Arduino MEGA board takes the scanned data and uses it to send USB and MIDI signals.

Each barcode translates to a numeric code, which is mapped to a note on the synthesizer connected to the controller. James also built in a variety of controls for adding nuance to his performance, including programmable buttons, pitch bend, and octave and channel shifters, all made from arcade controls.

Check it out in action the video clip below:

James created the body and neck of the guitar using a combination of 3D-printed parts, and off-the shelf hardware. If you’re interested in building your own barcode guitar, head over to GitHub, where you can download the CAD data and code, which James has generously shared under a GPL3 license.