If you grew up in the 1970s or 1980s, Atari was located somewhere near the center of your universe. The brand kicked off the home video game revolution with the Atari 2600, and also created some of the best and most memorable arcade games. Over the years, the brand has waned in popularity, and been sold and reinvented multiple times. In 2020 and beyond, Atari hopes to stage a big comeback, first with an all new game console, and now with the announcement that it’s launching a chain of video game-themed hotels. 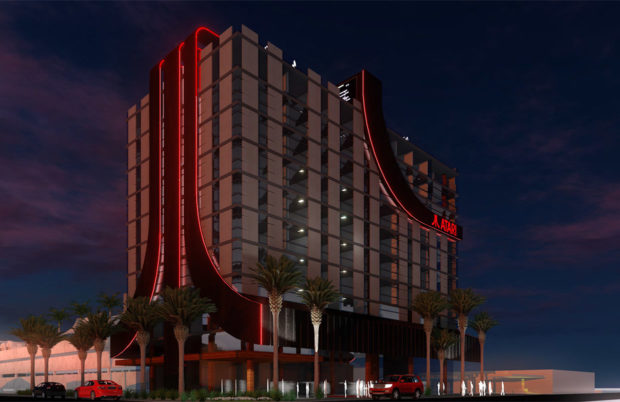 We don’t know too much about the Atari Hotels project as of yet, but they plan is that they’ll include tons of Atari branded games and merch. I’m certain there will be plenty of classic arcade games to play, but they also plan on having an array of high-tech games, including augmented reality experiences. We’ve been told that the hotels will feature a retro-modern design aesthetic, and from the rendering above, it looks like the exterior will prominently feature the iconic Atari logo.

Atari has teamed up with the GSD Group and real estate developer True North Studio to create Atari Hotels, with the first location expected to break ground in Phoenix later in 2020. If all goes well, we can expect additional locations to open in Las Vegas, Denver, Chicago, Austin, Seattle, San Francisco, and San Jose down the road.

I’m looking forward to staying at one of these hotels once they open. I’m hoping they have themed rooms, so I can stay in the Tempest or BattleZone suites.