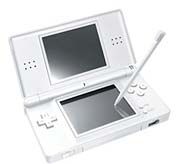 Time magazine has selected the recently-released Nintendo DS Lite as their favorite gadget this week. By pushing hard on brain teasers like Soduku, Brain Age and Big Brain Academy, it looks like they’re trying to broaden their demographic appeal to an older audience, and potentially more women.

While I’ve always thought the technology of the Sony PSP was more advanced than the Nintendo DS, Nintendo won us over with far superior games and control schemes.

Will history repeat itself this holiday season when the Wii and PS3 go head to head (assuming that they meet their launch dates)? Personally, I think so. [via Time]