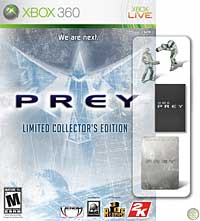 2K Games and 3D Realms announced today that the long-awaited FPS, Prey, has gone gold for the Xbox 360 on PC. This game has been in various forms of production for many years now, and was looking very good when it was shown at E3.
According to the publisher:

The game will be released on July 11th in the US and July 14th in Europe, and will be available in a regular and limited collector’s edition which will include bonus content.A downloadable PC demo is now available on the game’s official website.